This Flood Watch provides early advice of possible flooding within the specified catchments.
Flood Watch for NSW Coastal Rivers from the Bellinger River on the Mid-North Coast to the Bega River on the South Coast

From Sunday into early next week, heavy rainfall and thunderstorms are forecast across parts of the Hawkesbury-Nepean Valley extending into the Hunter, Paterson, Williams, Gloucester, and Manning Rivers. This rainfall has the potential to cause renewed river level rises to areas already impacted by flooding. Moderate to Major flooding is possible.

The focus of the heaviest rainfall, and rivers at greatest risk are those extending from greater Sydney to the Hunter and Manning Rivers, where moderate to major flooding is possible. The weather system may also cause minor to moderate flooding along coastal rivers from the Bellinger to Myall Rivers along the NSW Mid-North Coast. Minor to Moderate flooding is possible along the NSW South Coast from the Illawarra to Bega.

The weather system is expected to cause local and riverine flooding for the coastal rivers from Bellinger to Bega. Flood classes (minor, moderate, major) are only defined for catchments where the Bureau provides a flood warning service.

Catchments likely to be affected include:
Bellinger and Kalang Rivers
minor flooding 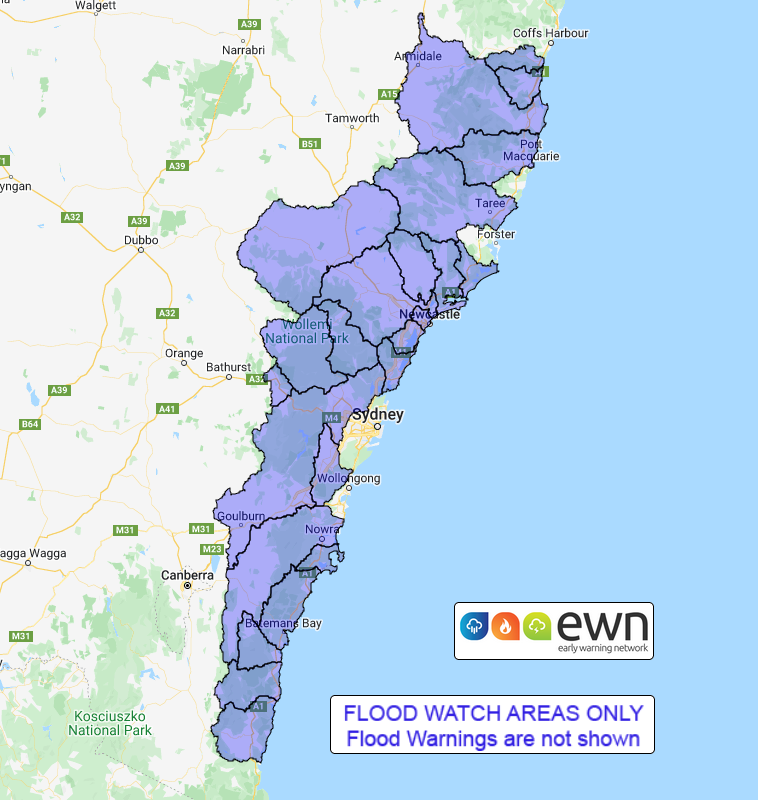