NSW Flood Watch: NSW coast from the Brunswick to the Bega Rivers

A coastal trough near the northern and central New South Wales coast is bringing increased rainfall to the New South Wales Coast. This trough is expected to deepen and gradually shift southwards, increasing rainfall along the central and southern parts of the coast and adjacent ranges during the next few days. For some areas, intense rainfall rates are possible with thunderstorm activity or with the formation of mesoscale lows embedded within the coastal trough.

The location of the heaviest falls will be determined by the movement and strength of the coastal trough, by where thunderstorms occur, as well as to the south of any transient low embedded within the coastal trough. The heaviest rainfall over the next 24 hours is initially focused about the Mid North Coast and the Lower Hunter but will shift south to focus about the Hunter, Sydney and Illawarra coasts Friday evening and into Saturday.

Heavy rainfall is currently expected to ease for parts of the Northern Rivers and northern parts of the Mid North Coast on Saturday, although showers are likely to continue.

Coastal catchments within the Flood Watch are area relatively wet due to recent rainfall in the last fortnight.

The weather system has the potential to cause flooding for the catchments listed from late Thursday onwards. Flood Classes (minor, moderate, major) are only defined for catchments where the bureau provides a flood warning service.

Catchments likely to be affected include:
Brunswick River and Marshalls Creek
minor flooding

Flood warnings are current for the following catchments: Bellinger and Kalang and Orara Rivers 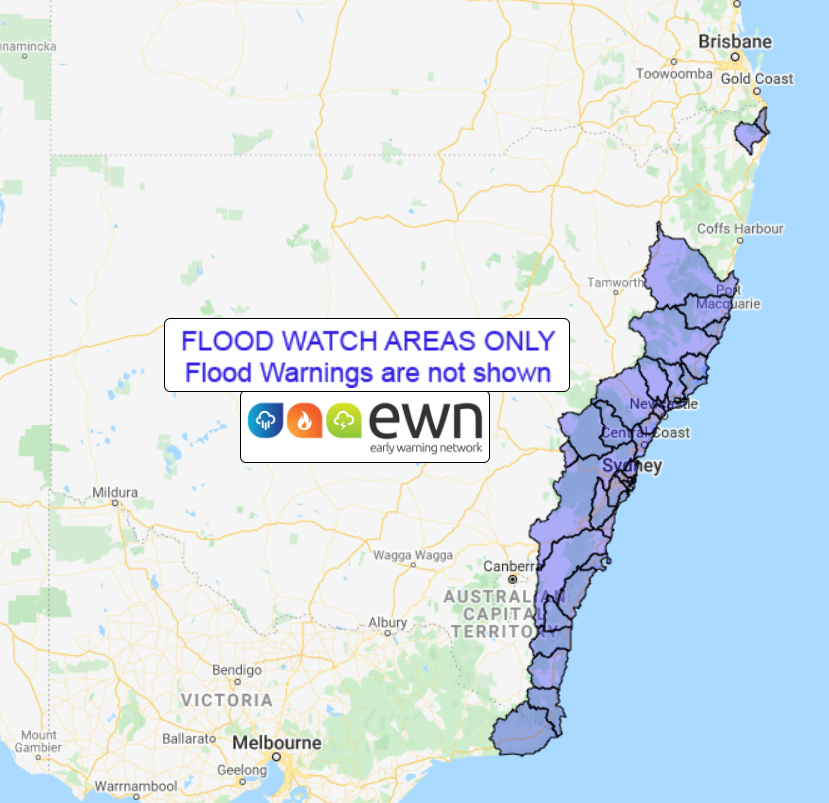