Weather Situation: Severe thunderstorms are continuing in northwestern parts of the state in a humid airmass supported by an upper cut-off low over South Australia. Thunderstorms are also forming across central and south-eastern parts.

Severe thunderstorms are likely to produce damaging winds and heavy rainfall that may lead to flash flooding over the next several hours in parts of the Central West Slopes and Plains, Riverina, Lower Western and Upper Western districts. Locations which may be affected include Deniliquin, Hay, Cobar, Bourke, Ivanhoe and Balranald.

Severe thunderstorms are likely to produce intense rainfall that may lead to dangerous and life-threatening flash flooding over the next several hours in parts of the Northern Rivers district. Locations which may be affected include Murwillumbah, Tyalgum, Mullumbimby, Byron Bay, Ballina and Brunswick Heads.

Severe thunderstorms are likely to produce heavy rainfall that may lead to flash flooding over the next several hours in parts of the Snowy Mountains district. Locations which may be affected include Jindabyne.

A Severe Weather Warning is current for north-eastern parts of the State for Damaging Winds and Heavy Rainfall. For the latest warnings see http://www.bom.gov.au/nsw/warnings/ . 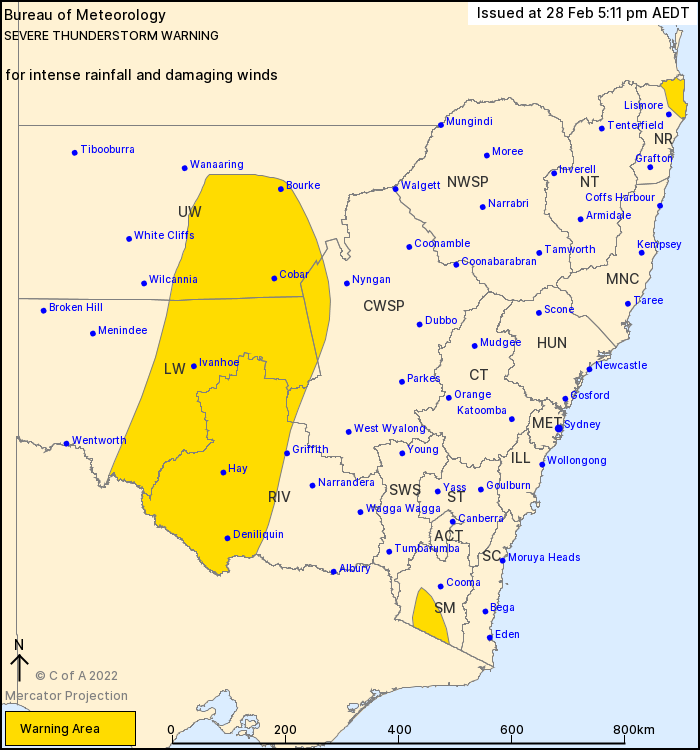