Severe thunderstorms are likely to produce heavy rainfall that may lead to flash flooding over the next several hours in the Hunter, North West Slopes and Plains and parts of the Mid North Coast, Central Tablelands, Central West Slopes and Plains and Northern Tablelands districts. Locations which may be affected include Newcastle, Armidale, Tamworth, Gunnedah, Moree and Narrabri.

Severe thunderstorms are likely to produce heavy rainfall that may lead to flash flooding and damaging winds over the next several hours in the Central Tablelands, Southern Tablelands, South West Slopes, Snowy Mountains, Australian Capital Territory and parts of the Hunter, Illawarra, South Coast, North West Slopes and Plains and Central West Slopes and Plains districts. Locations which may be affected include Batemans Bay, Orange, Canberra, Goulburn, Yass and Dubbo.

Some thunderstorms may produce intense rainfall that could lead to dangerous and life-threatening flash flooding over the next several hours in elevated parts of the Mid North Coast district. Locations which may be affected include Barrington Tops.
Be aware that run-off from rainfall in fire affected areas may behave differently and be more rapid. It may also contain debris such as ash, soil, trees and rocks.

Trees that have been damaged by fire are likely to be more unstable and more likely to fall.
Stay vigilant and monitor conditions. Note that the landscape may have changed following bushfires. 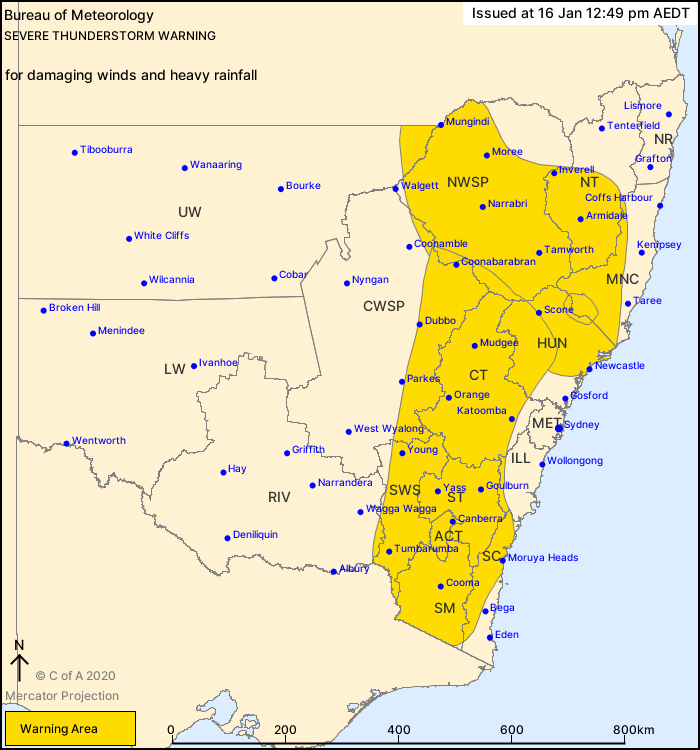