Severe thunderstorms are likely to produce intense rainfall that may lead to dangerous and life-threatening flash flooding over the next several hours in parts of the Mid North Coast district. Locations which may be affected include Coffs Harbour, Wooli, Woolgoolga, Sawtell and Urunga.

Severe thunderstorms are likely to produce heavy rainfall that may lead to flash flooding over the next several hours in parts of the Northern Rivers, Mid North Coast, North West Slopes and Plains and Northern Tablelands districts. Locations which may be affected include Grafton, Coffs Harbour, Moree, Narrabri, Sawtell and Dorrigo.

Severe thunderstorms are no longer occurring in the Hunter, Illawarra, Central Tablelands, Southern Tablelands and Central West Slopes and Plains districts and the warning for these districts is CANCELLED.

43mm of rainfall was recorded at Taralga and Tarana (Fish River) in the 2 hours to 9:15pm, 38mm of which fell in 1 hour at Tarana.

162mm of rainfall was recorded at Pacific Highway (Corindi River) in the 2 hours to 11:15pm.

101mm of rainfall was recorded at Boyles Bridge (Corindi River) in the 2 hours to 11:15pm. 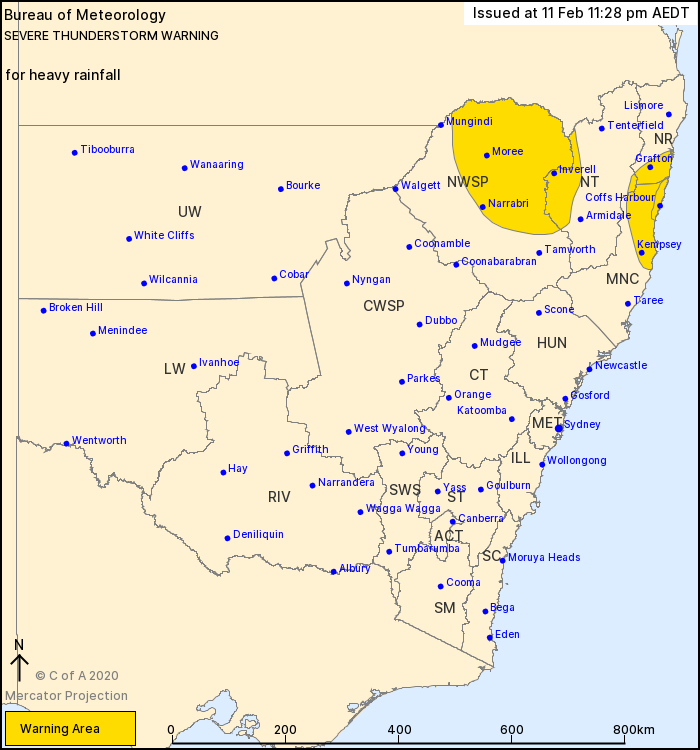