Severe thunderstorms occurring through southern inland and western parts of the State.

Weather Situation: Severe thunderstorms continue to trigger in a humid airmass across southern inland and western parts of the state, supported by an approaching upper trough from the west.

Severe thunderstorms are likely to produce heavy rainfall that may lead to flash flooding over the next several hours in parts of the Central West Slopes and Plains, South West Slopes, Riverina, Lower Western and Snowy Mountains districts. Locations which may be affected include Wagga Wagga, Albury, West Wyalong, Tumbarumba, Griffith and Narrandera.

Severe thunderstorms are likely to produce heavy rainfall that may lead to flash flooding and damaging winds over the next several hours in parts of the Lower Western and Upper Western districts. Locations which may be affected include Tibooburra, Wilcannia, White Cliffs, Menindee and Milparinka.

Narrandera Airport recorded 35.4mm of rainfall in the 1 hour to 9:00pm. 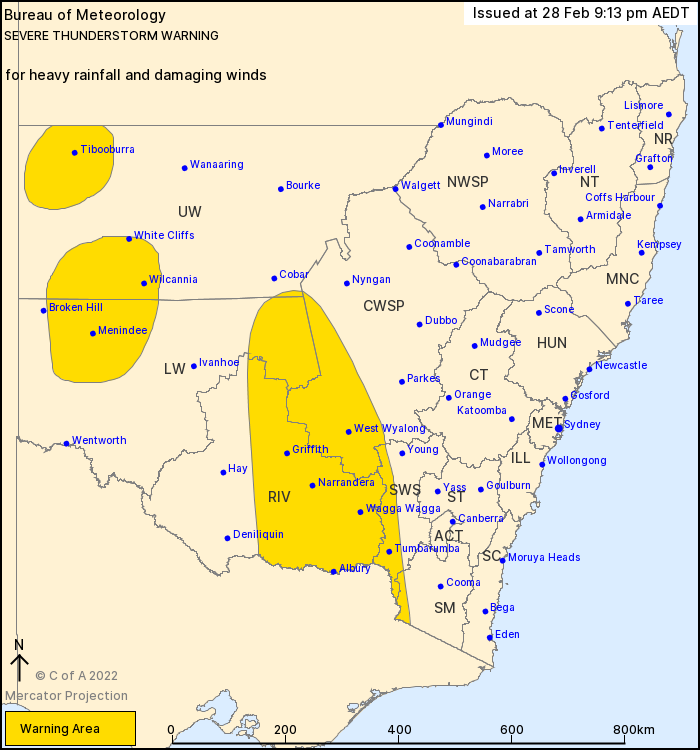