For people in parts of Lower Western and Upper Western Forecast Districts.

Weather Situation:
A humid and unstable airmass is combining with an approaching upper level disturbance to produce severe thunderstorms today across western parts of the state. Thunderstorms are slow moving with evidence of INTENSE rainfall and flooding around Broken Hill. Thunderstorm activity is expected to increase into early evening and then reduce late evening.

Severe thunderstorms are likely to produce intense rainfall that may lead to dangerous and life-threatening flash flooding over the next several hours in parts of the Lower Western and Upper Western districts. Locations which may be affected include Broken Hill and Menindee.

Severe thunderstorms are likely to produce heavy rainfall that may lead to flash flooding over the next several hours in parts of the Lower Western and Upper Western districts. Locations which may be affected include Tibooburra, White Cliffs, Broken Hill, Menindee, Fowlers Gap and Milparinka.

Broken Hill recorded 35 mm in the 1 hour to 3.45 pm CDST. Evidence of much heavier falls around Broken Hill. 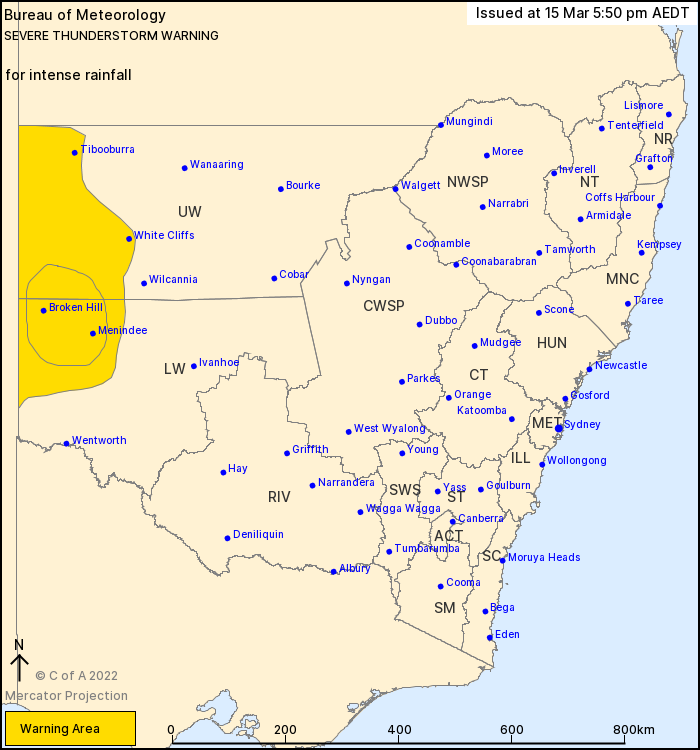