Weather Situation: A very humid and unstable airmass east of a trough over western NSW, will continue to produce thunderstorms for the remainder of the evening.

Severe thunderstorms are likely to produce intense rainfall that may lead to dangerous and life-threatening flash flooding over the next several hours in parts of the South West Slopes and Riverina districts. Locations which may be affected include Albury, Tumbarumba, Khancoban and Holbrook.

Severe thunderstorms are likely to produce damaging winds, large hailstones and heavy rainfall that may lead to flash flooding over the next several hours in the South West Slopes, Snowy Mountains, Australian Capital Territory and parts of the South Coast, Southern Tablelands, Central West Slopes and Plains and Riverina districts. Locations which may be affected include Canberra, Parkes, Wagga Wagga, Albury and Griffith.

Severe thunderstorms are likely to produce damaging winds and heavy rainfall that may lead to flash flooding over the next several hours in the Upper Western district and parts of the North West Slopes and Plains. Locations which may be affected include Walgett and Lightning Ridge 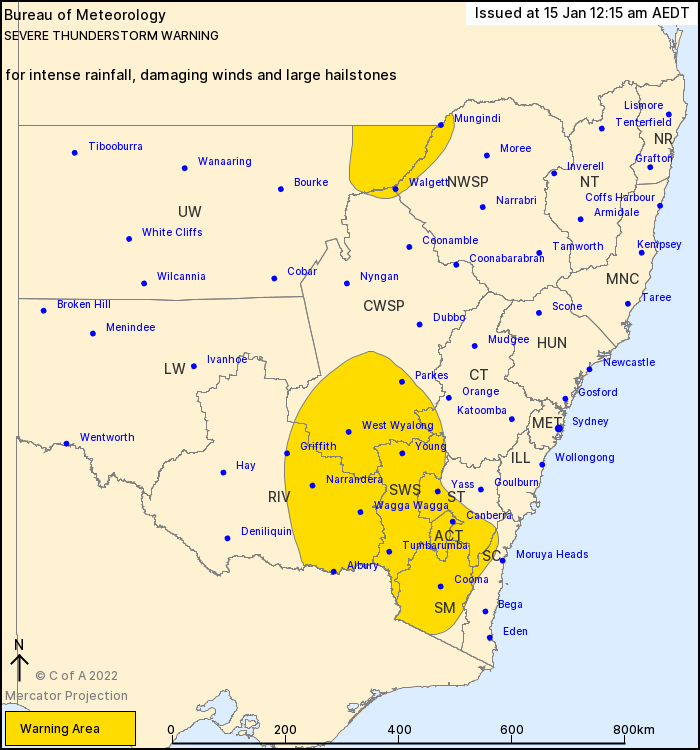