Strong to severe thunderstorms developing over central parts of the state, and also the far southeast.

Weather Situation:
A surface trough lies over the central inland of NSW, with a moist and unstable airmass to its east. Winds in the upper atmosphere will increase through the afternoon as an upper trough approaches the area, leading to increasing chances of severe thunderstorms later today.
Moist and unstable conditions also continue this afternoon near and east of a second trough over the far southeast of NSW.

Severe thunderstorms are likely to produce damaging winds, large hailstones and heavy rainfall that may lead to flash flooding over the next several hours in parts of the Mid North Coast, Hunter, Central Tablelands, North West Slopes and Plains, Central West Slopes and Plains and Northern Tablelands districts. Locations which may be affected include Scone, Mudgee, Dubbo, Parkes, Wellington and Nyngan.

Severe thunderstorms are likely to produce heavy rainfall that may lead to flash flooding over the next several hours in parts of the South Coast, Snowy Mountains and Australian Capital Territory districts. Locations which may be affected include Cooma, Bombala, Bredbo, Adaminaby and Nimmitabel. 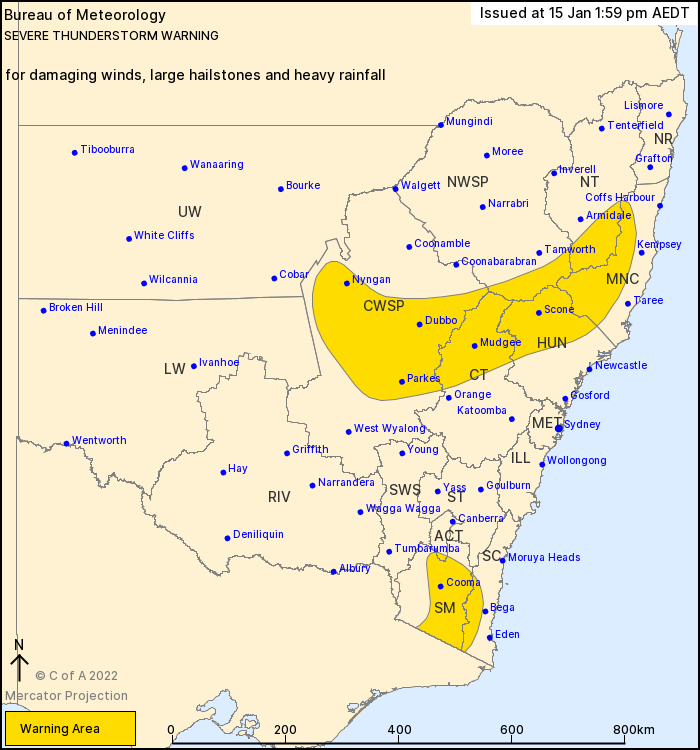