Issued at 6:03 pm Wednesday, 2 March 2022.
Severe thunderstorms resulting in heavy rainfall over the interior, storms in the northeast may also result in damaging winds and large hail.

Weather Situation: A humid and unstable atmosphere exists under a slow moving upper level low that is aiding instability.

Severe thunderstorms are likely to produce heavy rainfall that may lead to flash flooding over the next several hours in parts of the Hunter, Central Tablelands, North West Slopes and Plains and Central West Slopes and Plains districts. Locations which may be affected include Mudgee, Gunnedah, Dubbo, Coonabarabran, Wellington and Coonamble.

Severe thunderstorms are likely to produce heavy rainfall that may lead to flash flooding, damaging winds and large hailstones over the next several hours in parts of the Northern Rivers and Northern Tablelands districts. Locations which may be affected include Lismore, Tenterfield, Casino, Kyogle, Coraki and Tabulam.

Severe thunderstorms are no longer occurring in the Lower Western and Upper Western districts and the warning for these districts is CANCELLED.
Molong (Bonnie Doon) recorded 60mm of rainfall in the hour to 4 pm. 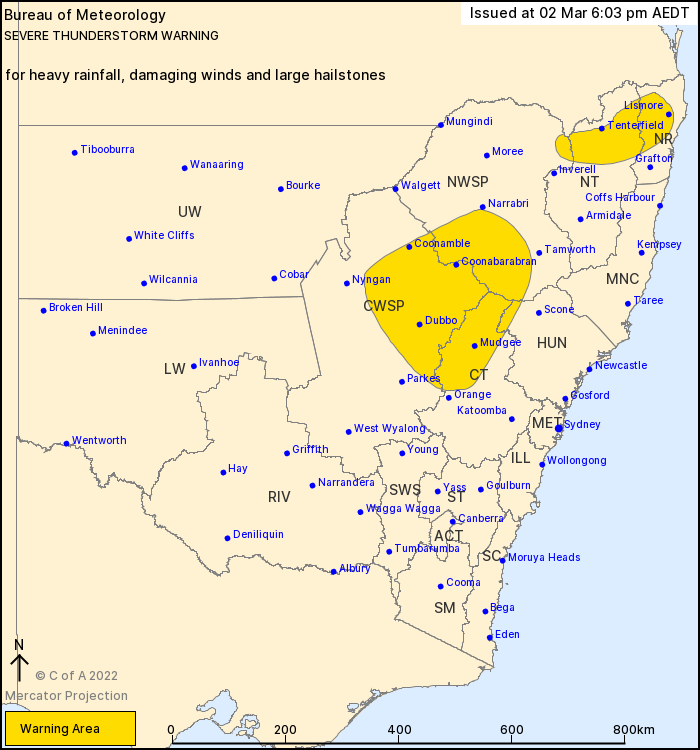