For people in parts of Hunter, Metropolitan and Illawarra Forecast Districts.

BLUSTERY CHANGE FOR PARTS OF THE COAST LATER TODAY

A Southerly Buster is expected to affect central parts of the New South Wales coast later this afternoon and early evening, bringing a period of strong to gale force winds to the coastal fringe.

DAMAGING WINDS, averaging 60 to 70 km/h with peak gusts up to 90 km/h are possible along the Illawarra coastal fringe, Sydney Metropolitan coastal fringe and the Central Coast during the late afternoon and early evening.

Winds are expected to gradually ease later in the evening.

Locations which may be affected include Sydney, Wollongong, The Entrance, Woy Woy, Bulli and Port Kembla.

The State Emergency Service advises that people should:
* Move vehicles under cover or away from trees.
* Secure or put away loose items around your house, yard and balcony.
* Keep at least 8 metres away from fallen power lines or objects that may be energised, such as fences.
* Report fallen power lines to either Ausgrid (131 388), Endeavour Energy (131 003), Essential Energy (132 080) or Evoenergy (131 093) as shown on your power bill.
* For emergency help in floods and storms, ring your local SES Unit on 132 500. 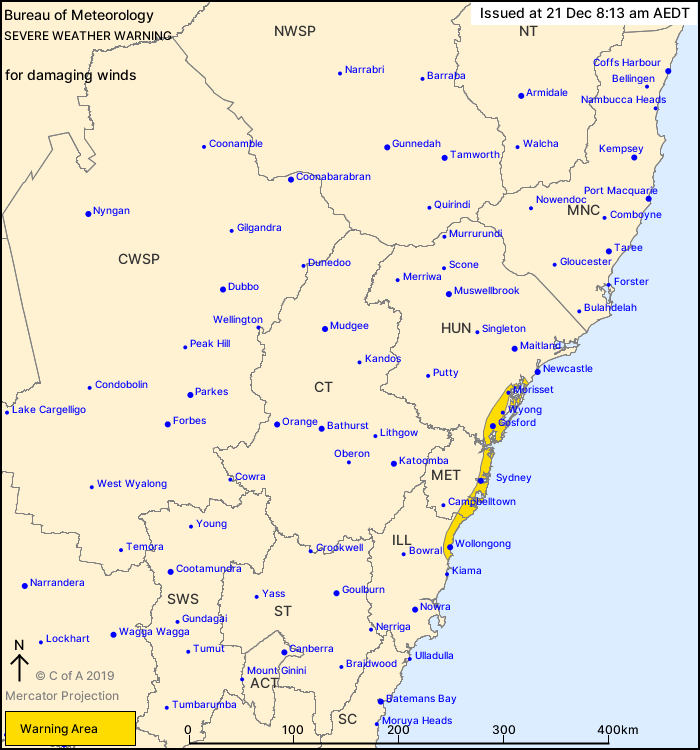