Strong to gale force winds are forecast for parts of southern and western New South Wales later today and Thursday, as a cold front approaches from the west. This front will enter the state's southwest this evening, continuing through central and southeastern areas during Thursday, increasing winds through those regions.

For the Lower Western, Upper Western and Riverina districts: DAMAGING WINDS averaging 55 to 65 km/h, with gusts to 90 km/h, are possible this afternoon and evening. Gusts are most likely with thunderstorm activity.

For areas above 1500 metres in the Snowy Mountains, Australian Capital Territory and South West Slopes districts: DAMAGING WINDS averaging 60 to 70 km/h, with gusts to 90 km/h, are expected to develop this evening, likely continuing into Thursday. In Alpine locations above 1900 metres, winds may average 70 to 90 km/h, with gusts to 120 km/h.
Later this evening and into Thursday, DAMAGING WINDS may extend about the Southern Tablelands, parts of the Central Tablelands, and western parts of the Illawarra and South Coast districts.
These winds are likely to generate areas of raised dust in the west, possibly thick with visibility reductions. The chance of dust reaching the eastern NSW during Thursday.
Trees and branches in fire-affected areas may be more susceptible to falling than usual.

Locations which may be affected include Bowral, Bathurst, Katoomba, Canberra, Goulburn, Cooma, Yass, Broken Hill and Wentworth.
The State Emergency Service advises that people should:
* Move vehicles under cover or away from trees.
* Secure or put away loose items around your house, yard and balcony.
* Keep at least 8 metres away from fallen power lines or objects that may be energised, such as fences.
* Report fallen power lines to either Ausgrid (131 388), Endeavour Energy (131 003), Essential Energy (132 080) or Evoenergy (131 093) as shown on your power bill.
* For emergency help in floods and storms, ring your local SES Unit on 132 500. 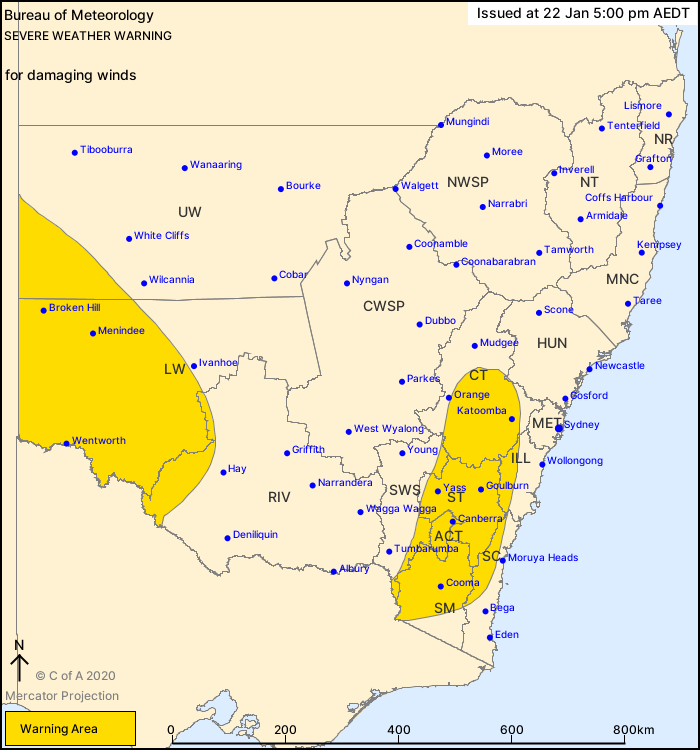