VIGOROUS WINDS AHEAD OF A COLD FRONT

A cold front lies over southwest New South Wales, and is expected to progress through southeastern and central parts of New South Wales during Thursday. Vigorous and gusty winds are forecast ahead of the front.

DAMAGING WINDS, averaging 80 to 90 km/h with peak gusts in excess of 120 km/h are expected.

DAMAGING WINDS, averaging 60 to 70 km/h with peak gusts in excess of 90 km/h are possible for the Southern Tablelands, Snowy Mountains, Australian Capital Territory, Illawarra and parts of the Central Tablelands, South Coast and South West Slopes districts. These winds are possible about elevated locations from early this morning, extending to coastal parts later this morning.

Trees and branches in fire-affected areas may be more susceptible to falling than usual.

Winds are expected to ease this evening.

Locations which may be affected include Wollongong, Nowra, Bowral, Bathurst, Katoomba, Canberra, Goulburn, Cooma and Yass. 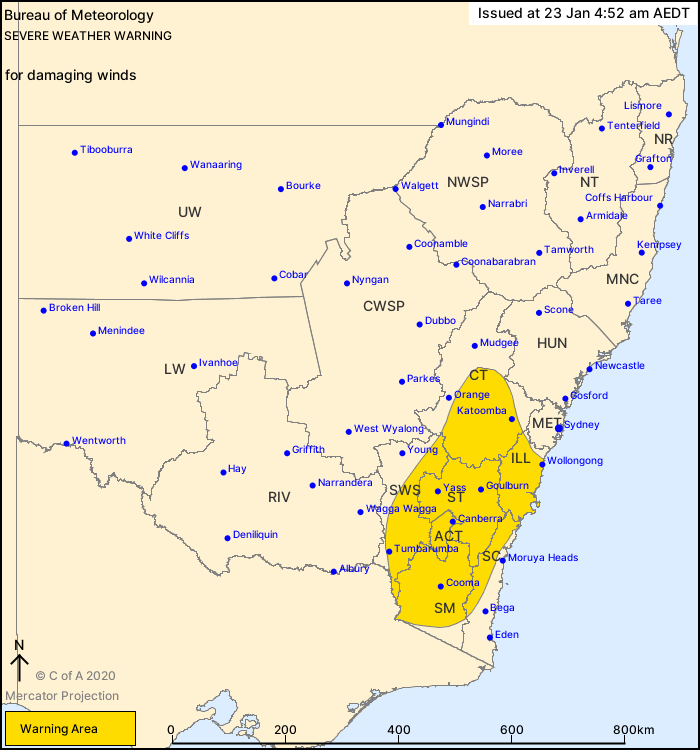