Weather Situation: A deepening low off the central coast of NSW is expected to drift southwestward towards the coast overnight rapidly deepening in response to an amplifying upper trough and low and will continue on this track through Wednesday. At this stage, the system is forecast to approach central and southeastern districts during Wednesday and overnight into Thursday, however, uncertainty exists on its exact timing and where the most significant impacts will occur.

HEAVY RAINFALL which may lead to flash flooding is forecast to develop over parts of the Hunter and Metropolitan, Illawarra, South Coast and parts of Central Tablelands and Southern Tablelands Forecast Districts from tonight. Six-hourly rainfall totals between 80 and 120 mm are likely.

Locally INTENSE RAINFALL leading to dangerous and LIFE-THREATENING FLASH FLOODING is possible with thunderstorms with six-hourly rainfall totals up to 200 mm possible.
DAMAGING WIND GUSTS with peak gusts in excess of 90 km/h may develop over parts of the coastal fringe in the warning area from Wednesday.
A Severe Thunderstorm Warning will be issued if very dangerous thunderstorms with intense rainfall are detected.

Heavy rainfall increases the potential for landslides and debris across roads.
A separate Severe Weather Warning for Damaging Surf and Abnormally High Tides is current for coastal areas south of Forster.
A Flood Watch and multiple Flood Warnings are current for parts of New South Wales. For more details, please visit www.bom.gov.au/nsw/warnings. 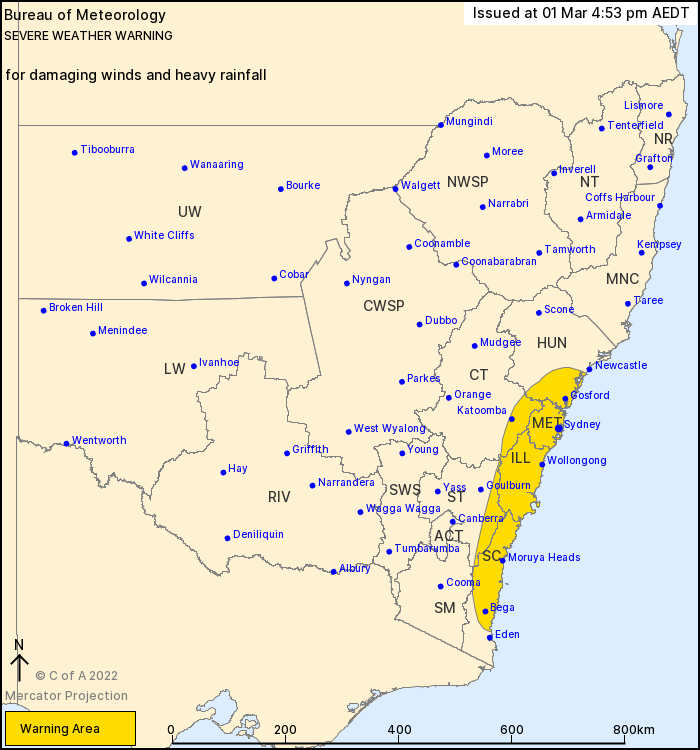