A low pressure system is expected to deepen and develop into an East Coast Low near the Hunter Coast tonight and track south. This system is forecast to bring Heavy Rainfall and Damaging Winds across the central and southern coast, ranges and hinterland.

HEAVY RAINFALL which may lead to FLASH FLOODING is forecast for the Mid North Coast, Hunter, Sydney Metropolitan, Illawarra, South Coast, and parts of the Central Tablelands districts. Six-hourly rainfall totals between 70 to 120 mm are possible. Heavy rainfall will persist throughout the warning area today, with the peak of the rainfall most likely about the Sydney Metropolitan and Illawarra districts tonight and into Tuesday.

Locally INTENSE RAINFALL leading to dangerous and LIFE-THREATENING FLASH FLOODING is possible with thunderstorms, six-hourly rainfall totals in excess of 150 mm are possible.

DAMAGING WIND GUSTS with peak gusts in excess of 90 km/h are possible on TUESDAY over the Sydney Metropolitan, South Coast, Illawarra and Southern Tablelands districts, including the ACT ranges. The risk of damaging wind gusts will begin during Tuesday morning, and continue into Wednesday.

Severe weather is no longer occurring in the North West Slopes and Plains and Northern Tablelands districts and the warning for these districts is CANCELLED.

108 mm of rainfall recorded in the 6 hours to 4 pm at Turners Flat.

54.6 mm of rainfall recorded in the 2 hours to 4 pm at Carrowbrook. 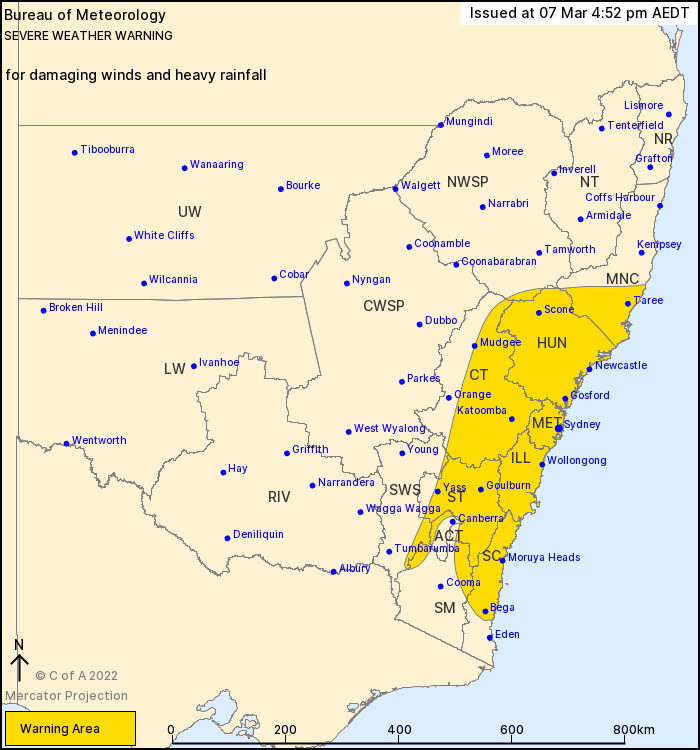