Weather Situation: A low pressure system and an associated coastal trough near the northeast NSW coast is causing heavy rainfall in the region, with locally intense falls within embedded thunderstorms. The low is currently close to the coast and is expected to gradually move further offshore today, slowly contracting the areas of heavy rainfall further south.

HEAVY RAINFALL which may lead to FLASH FLOODING is forecast over parts of the Northern Rivers, Mid North Coast and Hunter Districts. Six-hourly rainfall totals between 80 to 140 mm are possible. Rainfall rates have currently eased over some areas within the warning, however HEAVY RAINFALL may redevelop later today within the warning area, particularly with thunderstorms.

Locally INTENSE RAINFALL leading to DANGEROUS AND LIFE-THREATENING FLASH FLOODING is becoming less likely but is still possible with thunderstorms with six-hourly rainfall totals reaching up to 200mm.

HEAVY and LOCALLY INTENSE rainfall is expected to contract to coastal areas of the Mid North Coast districts later today and extend to parts of the Hunter coast.

DAMAGING WIND GUSTS with peak gusts of around 90km/h are possible about coastal areas.

Locations which may be affected include Lismore, Grafton, Coffs Harbour, Port Macquarie, Taree and Dorrigo.

Severe weather is no longer occurring in the Northern Tablelands district and the warning for this district is CANCELLED.

24hrs rainfall totals to 9am Wednesday: 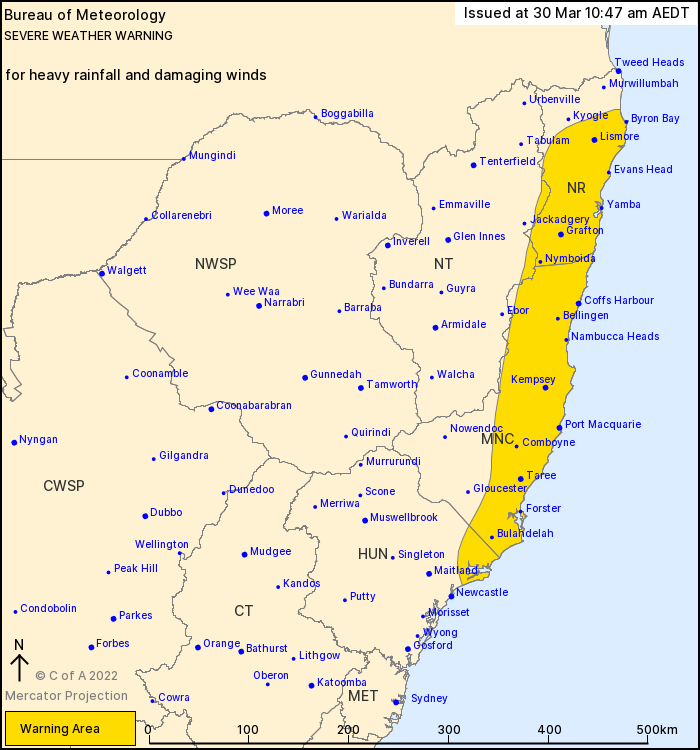