Weather Situation: A deep low pressure system over the southwest Tasman Sea will maintain a vigorous westerly flow over NSW on Tuesday and into Wednesday. A second low pressure system moving into eastern Bass Strait will strengthen winds over Alpine and southern coastal NSW during Wednesday morning.

Strong winds averaging 60 to 70km/h with DAMAGING WIND GUSTS to 100km/h are possible on and east of the ranges in southern parts of NSW from early on Wednesday morning. BLIZZARDS are likely about locations above 1800 metres, and possible above 1200 metres. The National Parks Service of NSW recommends that people consider postponing back country travel until conditions improve.

Conditions are expected to ease across the state from the north on Wednesday afternoon, easing in the south by Wednesday evening.

Severe weather is no longer occurring in the North West Slopes and Plains district and the warning for this district is CANCELLED.

Severe weather warnings are also current for adjacent areas of Victoria and Queensland. Refer to http://www.bom.gov.au/australia/warnings 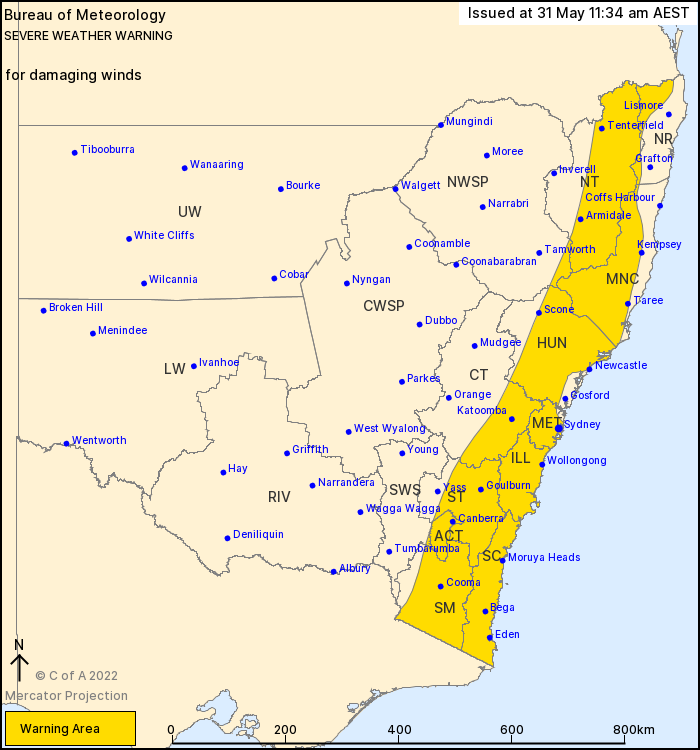