A trough lying along central and northern parts of the New South Wales coast is bringing persistent rain and windy conditions to many areas. This trough is expected to gradually extend into the southern coast later today and Monday before weakening.

HEAVY RAIN, which will likely cause FLASH FLOODING and RIVERINE FLOODING, is forecast for parts of the Mid North Coast, Hunter (including the Central Coast), Sydney Metropolitan, Illawarra and eastern parts of the Central Tablelands (including the Blue Mountains) districts today. The threat is expected to ease in the northern districts later today, while extending into the South Coast district.

There is potential for periods of very heavy (torrential) rainfall and life-threatening flash-flooding in the Hunter (including the Central Coast), Sydney Metropolitan, Illawarra and eastern parts of the Central Tablelands (including the Blue Mountains) districts.

The location of the heaviest rain will be determined by the movement and strength of the coastal trough, and the development of any transient low pressure circulations embedded within it.

DAMAGING WINDS averaging up to 65 km/h, with gusts to 90 km/h, are possible along the coastal fringe between Ulladulla and Forster today, shifting to between Wollongong and to the Victorian border through Monday.

ABNORMALLY HIGH TIDES are expected this morning, around which time the sea water level may exceed the highest tide of the year.

DAMAGING SURF CONDITIONS, with waves exceeding 5 metres in the surf zone, are forecast to develop this afternoon and evening, and may produce significant beach erosion in areas exposed to the east, mainly between Forster and Jervis Bay.

Since 9am Wednesday to 10am Sunday:

Approx. 400-500mm has fallen over the Northern Rivers

Approx 300-400mm has fallen over the Mid North Coast

Since 9am Friday to 10am Sunday

Approx 200-300mm has fallen over the Central Coast, Sydney and Eastern Blue Mountains 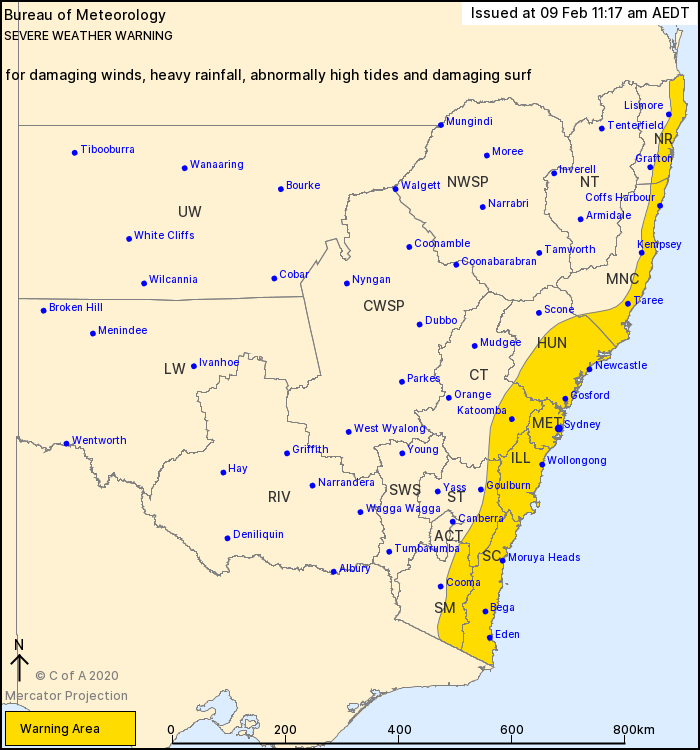