A trough lying along central and northern parts of the New South Wales coast is bringing persistent rain and windy conditions to many areas. This trough is expected to deepen and gradually extend into the southern coast later today and Sunday. With impacts then moving further south into Monday.

HEAVY RAIN, which will likely cause FLASH FLOODING and RIVERINE FLOODING, is forecast for parts of the Mid North Coast, Hunter, Sydney Metropolitan, Illawarra and eastern parts of the Central Tablelands (including the Blue Mountains) forecast districts today and Sunday.

There is potential for very heavy (torrential) rainfall and life-threatening flash-flooding in the Central Coast, Hunter, Sydney Metropolitan, Illawarra and eastern parts of the Central Tablelands (including the Blue Mountains) districts, particularly overnight tonight.

The location of the heaviest rain will be determined by the movement and strength of the coastal trough, and the development of any transient low pressure circulations embedded within it. In addition slow moving thunderstorms will create possible areas of intense rainfall.

DAMAGING WIND GUSTS, in excess of 90 km/h, are possible along the coastal fringe between Ulladulla and Forster later today and Sunday.

ABNORMALLY HIGH TIDES are forecast this morning, and the sea water level may exceed the highest tide of the year.

DAMAGING SURF CONDITIONS, with waves exceeding 5 metres in the surf zone, are forecast to develop tonight or Sunday, and may produce significant beach erosion in areas exposed to the east.

Rain Event Totals within the 48hrs to 9am Saturday:

Over 300mm has been recorded at stations surrounding Byron Bay

150 to 250mm has been recorded at stations surrounding the Central Coast (Hunter), with most rainfall falling during Friday.

Around 100mm has been recorded at stations surrounding the Sydney Metropolitan. 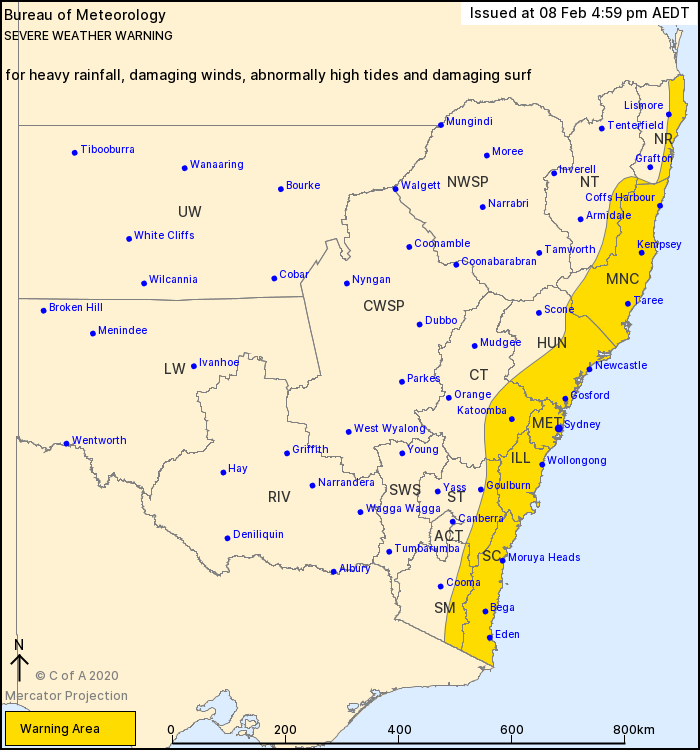