An upper low over northern NSW will slowly move south tonight and into Monday. A surface trough off the NSW coast is expected to strengthen, bringing moist southeasterlies onto the Mid North Coast, Hunter, Sydney Metropolitan area, Illawarra, South Coast, and parts of the Tablelands and Northwest Slopes and Plains..

HEAVY RAINFALL which may lead to flash flooding is forecast for the Mid North Coast, Hunter, Sydney Metropolitan area, Illawarra, South Coast, and parts of the Tablelands. Six-hourly rainfall totals between 70 to 120 mm are possible overnight Sunday about Mid North Coast and south parts of the North West Slopes and Plains and Northern tablelands districts, and south through the Hunter, Sydney Metropolitan area.

Heavy rainfall will extend southwards from early Monday morning and throughout the day to include Illawarra, South Coast and eastern Tablelands, whilst continuing through Mid North Coast and south parts of the North West Slopes and Plains and Northern tablelands.

Thunderstorms are occurring over the northern parts of the warning area. Locally intense falls are possible. Separate severe thunderstorm warnings will be issued if this eventuates. 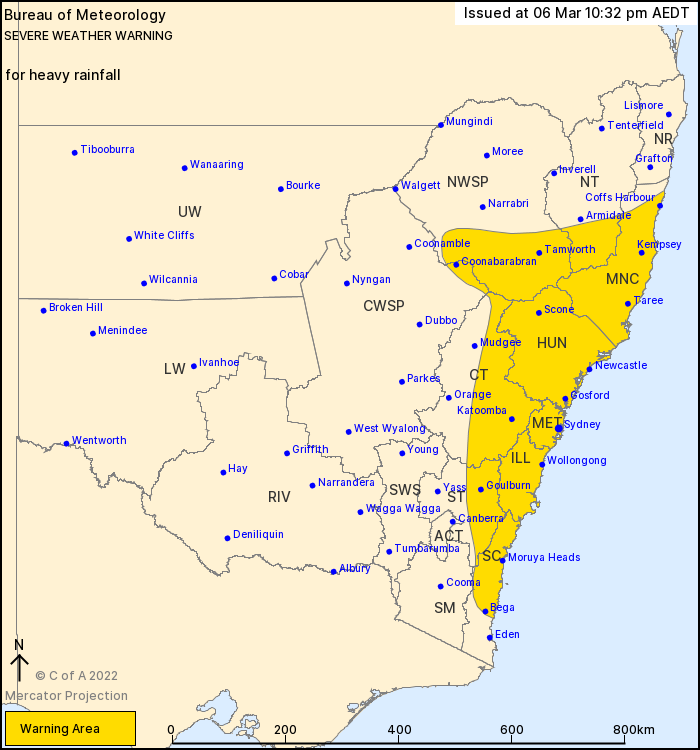