For people in Lasseter and parts of Simpson districts.

Weather Situation: An active trough is moving across central Australia. At 2:20 pm radar and satellite showed scattered thunderstorms between Yulara/Uluru and Alice Springs. These thunderstorms are expected to extend eastwards during the afternoon, but may also redevelop in the vicinity of Yulara/Uluru and the western Lasseter District.

Severe thunderstorms are likely to produce damaging winds over the next several hours in the Lasseter and parts of the Simpson districts. Locations which may be affected include Alice Springs, Yulara, Arltunga, Kulgera, Finke and Watarrka.

Severe thunderstorms are likely to produce heavy rainfall that may lead to flash flooding over the next several hours in parts of the Simpson and Lasseter districts. Locations which may be affected include Kulgera, Hermannsburg, Curtin Springs, Finke and Watarrka.
Small hail is also possible west and south of Alice Springs today.

There have been several reports of small hail at Yulara today.

The Northern Territory Emergency Service advises that people should:
* slow down and turn your headlights on
* create your own sandbags if there is flooding, by using pillow cases or shopping bags filled with sand and place them around doorways to protect your home
* secure loose outside objects
* ensure pets and animals are safe
* avoid remaining in the open when storms threaten
* pull over if it is raining heavily and you cannot see, park with your hazard lights on until the rain clears
* avoid driving into water of unknown depth and current
* for emergency help in floods, storms and cyclones, contact the NTES on 132 500. For more safety tips visit www.securent.nt.gov.au 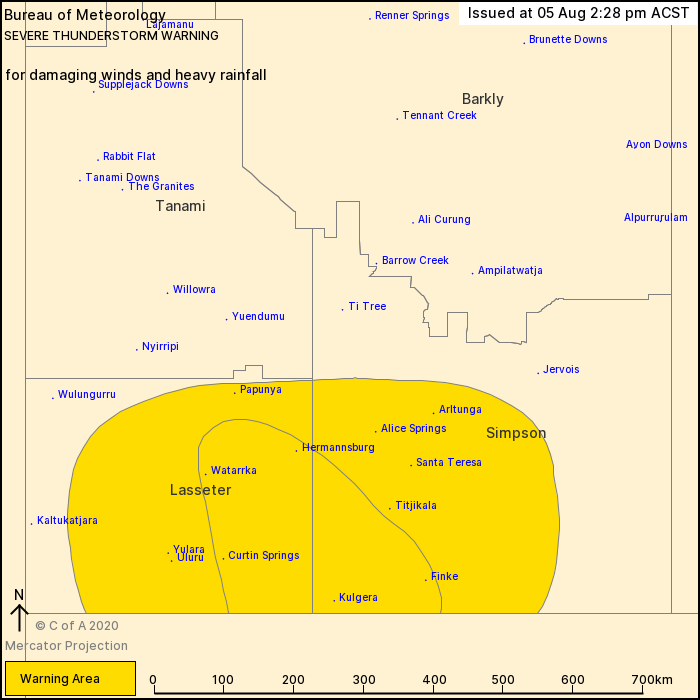