For people in Carpentaria and parts of Gregory and Barkly districts.

Weather Situation: At 9:30 am CST, Ex-Tropical Cyclone Esther was located about 80 kilometres north of Creswell Downs and 130 kilometres west southwest of Robinson River, moving west at about 11 kilometres/hour. The system is expected to continue moving west through the northern Barkly District over the next 12 to 18 hours and move into the eastern parts of the Gregory District on Wednesday morning as a deep tropical low. Squally thunderstorms and heavy rainfall are likely, particularly close to the system centre.

DAMAGING WINDS, averaging 50-60 km/h with peak gusts of around 100 km/h are expected over southern Carpentaria District and northern Barkly District today and tonight, extending to the eastern Gregory District on Wednesday. The strongest winds are likely to be associated with squally showers and thunderstorms.

HEAVY RAINFALL which may lead to FLASH FLOODING is expected over the southern Carpentaria and northern Barkly Districts today and tonight. extending to the eastern Gregory District early on Wednesday. The heaviest rainfalls are likely to be associated with squally showers and thunderstorms. 3 to 6 hourly rainfall totals of 50 to 110 mm are possible.

Locations which may be affected include Elliott, Borroloola, Larrimah, Daly Waters, Renner Springs and Carpentaria District.

24 hour rainfall totals to 9 am today include Baileys Grave at 174mm, McArthur River Mine at 168mm, and Borroloola at 147mm.

The Northern Territory Emergency Service advises that people should:
* secure loose outside objects and seek shelter when conditions deteriorate
* pull over if it is raining heavily and you cannot see, park with your hazard lights on until the rain clears
* avoid driving into water of unknown depth and current
* create your own sandbags if there is flooding, by using pillow cases or shopping bags filled with sand and place them around doorways to protect your home
* stay away from flooded drains, rivers, streams and waterways
* ensure pets and animals are safe
* be prepared in case of power outages, have an emergency kit with a radio, torch, spare batteries and first aid kit
* for emergency help in floods, storms and cyclones, contact the NTES on 132 500. For more safety tips visit www.securent.nt.gov.au 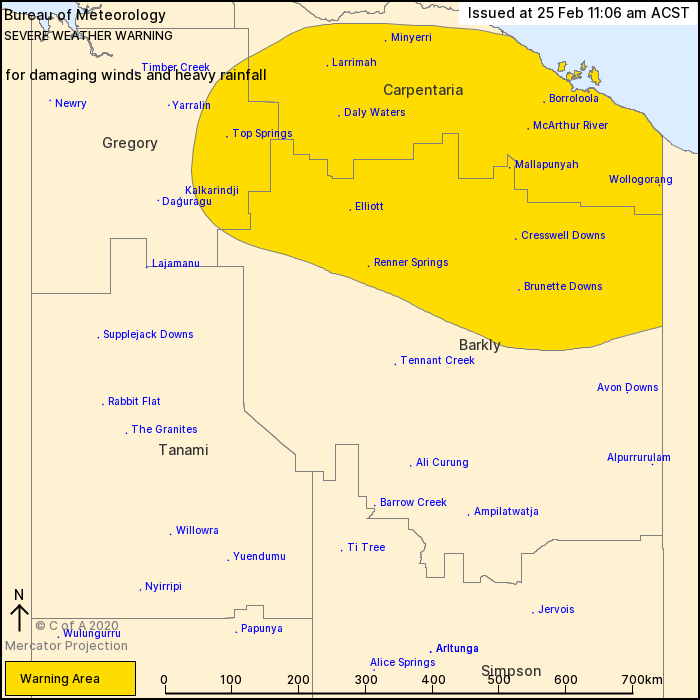