For people in parts of Lasseter district.

HEAVY TO INTENSE RAINFALL CONTINUING ACROSS THE FAR SOUTHERN TERRITORY.

Weather Situation: A trough extends from a low embedded in the monsoon trough over northern WA southwards into southwestern NT and into northern SA. Convergence in an environment with significant tropical moisture leading to widespread heavy and intense rainfall.

HEAVY RAINFALL which may lead to flash flooding is forecast for the south of the territory, developing overnight and continuing into Tuesday.

Locally INTENSE RAINFALL which may lead to dangerous and life-threatening flash flooding is also possible in the warning area, most likely about the far south.

Isolated 24 hour rainfall totals in excess of 150mm are possible.

Severe thunderstorms with heavy to intense rainfall are also possible in the warning area.

A flood watch is also current. See www.bom.gov.au/nt/warnings/ for more information.
Ernabella (in far northern SA) has recorded 102.2mm of rainfall in the period from 9:00am Monday to 5:00am Tuesday.

The Northern Territory Emergency Service advises that people should:
* secure loose outside objects and seek shelter when conditions deteriorate
* pull over if it is raining heavily and you cannot see, park with your hazard lights on until the rain clears
* avoid driving into water of unknown depth and current
* create your own sandbags if there is flooding, by using pillow cases or shopping bags filled with sand and place them around doorways to protect your home
* stay away from flooded drains, rivers, streams and waterways
* ensure pets and animals are safe
* be prepared in case of power outages, have an emergency kit with a radio, torch, spare batteries and first aid kit
* for emergency help in floods, storms and cyclones, contact the NTES on 132 500. For more safety tips visit www.securent.nt.gov.au 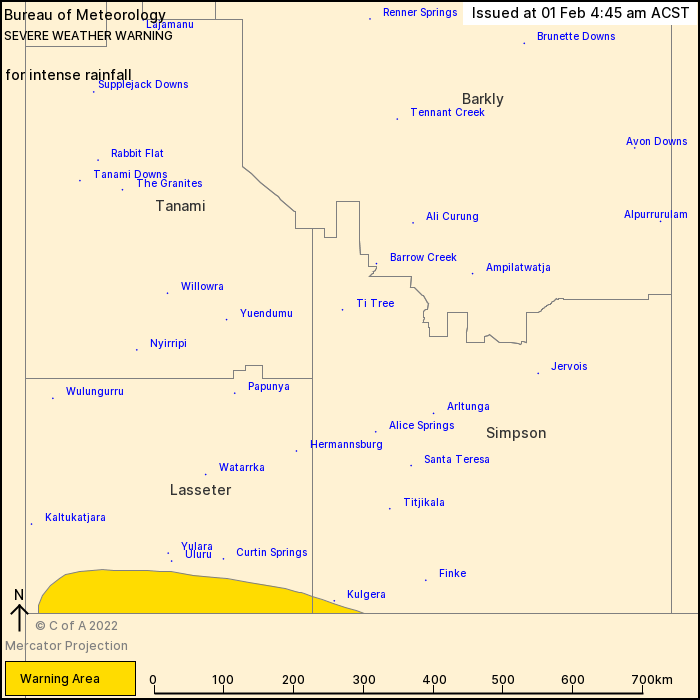