Watch Zone
Mornington Island to Kowanyama, including Burketown and Karumba, and nearby inland areas between Ngukurr and Burketown.

GALES with gusts to 110 kilometres per hour may develop over Groote Eylandt and Mornington Island on Sunday afternoon, and extend to coastal communities between Cape Shield and Mornington Island, including Borroloola, Burketown, and nearby inland areas between about Ngukurr and Burketown later on Sunday. GALES may extend to coastal areas between Port Roper and Cape Shield later on Sunday if the system takes a more westward track.

DESTRUCTIVE winds with gusts to 150 km/h are possible between about Borroloola and Mornington Island, including Centre Island on Monday, depending on the future track of the system.

In the Northern Territory, NTES advises:

People from Cape Shield to the NT/Qld Border, including Groote Eylandt and surrounding areas should activate their household plan now.

- Start preparations for a cyclone, know where you will shelter.

- Listen for the next advice.

People in remaining areas between Kowanyama and Mornington Island, including Burketown, Karumba, and nearby inland areas between the Northern Territory border and Burketown, should consider what action they will need to take if the cyclone threat increases.

- Information is available from your local government 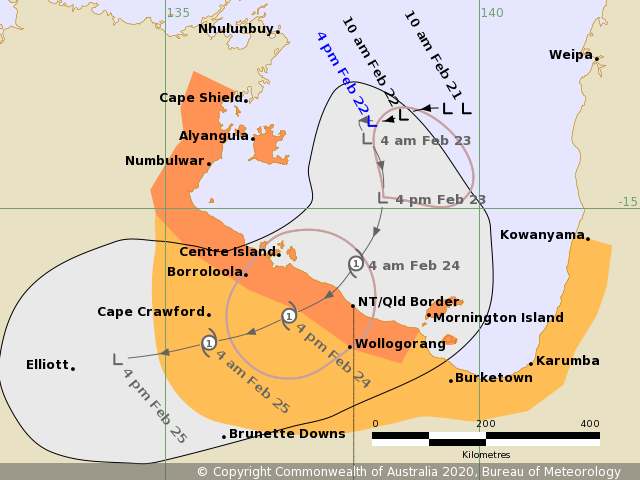