Watch zone: Kuri Bay to Derby, not including Derby.

Tropical Cyclone Anika is located in the southern Timor Sea and is moving southwest. The system is expected to reach category 2 prior to making landfall over the north Kimberley coast tonight into Sunday.

During Sunday the system is forecast to track further west-southwest and remain near the Kimberley coast, likely to move offshore from the coast near Kuri Bay on Tuesday. If or when it moves offshore, it is likely to strengthen.

Hazards:
DESTRUCTIVE WINDS with gusts to 130 kilometres per hour are expected to develop about the coastal fringe between Kalumburu and Wyndham near where the system crosses, which is likely tonight.

GALES with gusts to 100 kilometres per hour are currently occurring along the Kimberley coast between Kalumburu and Wyndham and are expected to extend further south and west across the north Kimberley overnight tonight and during Sunday. If the system moves further east, GALES could extend to Daly River Mouth during tomorrow.

GALES could extend along the west Kimberley coast to Kuri Bay tomorrow and to near Derby (but not including Derby) by Monday afternoon.

HEAVY RAINFALL is expected to likely develop about northern parts of the Kimberley tonight and continue into early next week as the system remains near the coast.

Tides near where the system crosses the coast are likely to rise above the normal high tide mark with very rough seas and flooding of low-lying coastal areas.

RED ALERT for people in or around Kalumburu, you need to go to shelter
immediately.

YELLOW ALERT for people in or around Kalumburu to Mitchell Plateau not
including Kalumburu and not including Wyndham. You need to take action and get ready to shelter from a cyclone.

Remaining people in the North Kimberley and the West Kimberley are advised to stay up to date with weather warnings and forecasts.

NTES advises:
- Finalise preparations for cyclone, monitor conditions and stay informed
- Move into shelter as conditions deteriorate.
- Public Shelters are not open at this time.
Information on preparing for cyclones can be found at https://securent.nt.gov.au/ 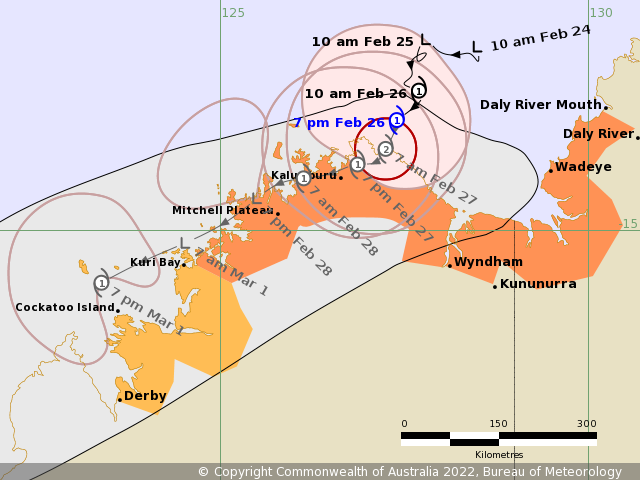