Issued at 5:06 pm Sunday, 16 January 2022.
Severe thunderstorms developing over the southeast, and also about the northern inland.

Weather Situation: Moist and unstable conditions associated with a weak surface trough over eastern Queensland will combine with relatively strong winds in the upper atmosphere to drive thunderstorm activity.
Over the north, strong instability and winds in the middle levels of the atmosphere will lead to the potential for damaging winds with lines of storms.

Severe thunderstorms are likely to produce damaging winds, large hailstones and heavy rainfall that may lead to flash flooding over the next several hours in parts of the Wide Bay and Burnett, Darling Downs and Granite Belt and Southeast Coast districts. Locations which may be affected include Kingaroy, Yarraman and Nanango.

Severe thunderstorms are likely to produce damaging winds over the next several hours in parts of the Peninsula, Gulf Country and Northern Goldfields and Upper Flinders districts.
Locations which may be affected include Georgetown and Forsayth. 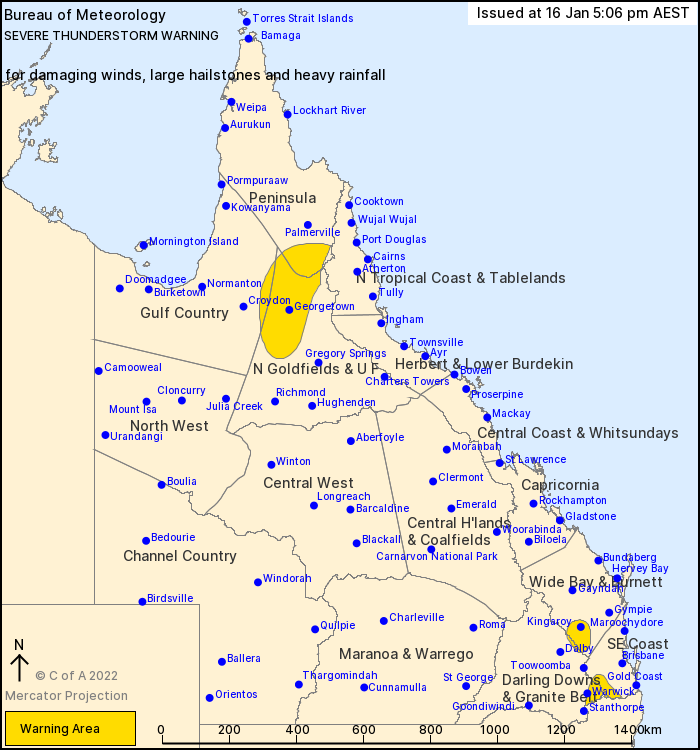