For people in Central Coast and Whitsundays, Capricornia and parts of Central Highlands and Coalfields Forecast Districts.

INTENSE RAINFALL POSSIBLE FROM STORMS IN THE ROCKHAMPTON AREA

Weather Situation: Thunderstorms are triggering to the east of a trough and dry-line this evening, with heavy to intense rainfall being triggered by a very humid easterly winds.

Severe thunderstorms are likely to produce INTENSE RAINFALL that may lead to dangerous and life-threatening flash flooding and damaging winds over the next several hours in parts of the Central Coast and Whitsundays, Central Highlands and Coalfields and Capricornia districts. Locations which may be affected include Rockhampton, Mount Morgan, Marlborough and St Lawrence.

Severe thunderstorms are likely to produce damaging winds and heavy rainfall that may lead to flash flooding over the next several hours in the Central Coast and Whitsundays, Capricornia and parts of the Central Highlands and Coalfields districts. Locations which may be affected include Gladstone, Rockhampton, Mackay, Yeppoon, Moranbah and Calliope.

Severe thunderstorms are no longer occurring in the Wide Bay and Burnett and Darling Downs and Granite Belt districts and the warning for these districts is CANCELLED.

Silver Valley (west of Innisfail) recorded 63mm of rainfall in the 1 hour to 5:20pm.

A wind gust to 102km/h was recorded at Proserpine Airport at 2:10pm.

Saddler Springs recorded 61mm of rainfall in the 90 minutes to 1:00pm. 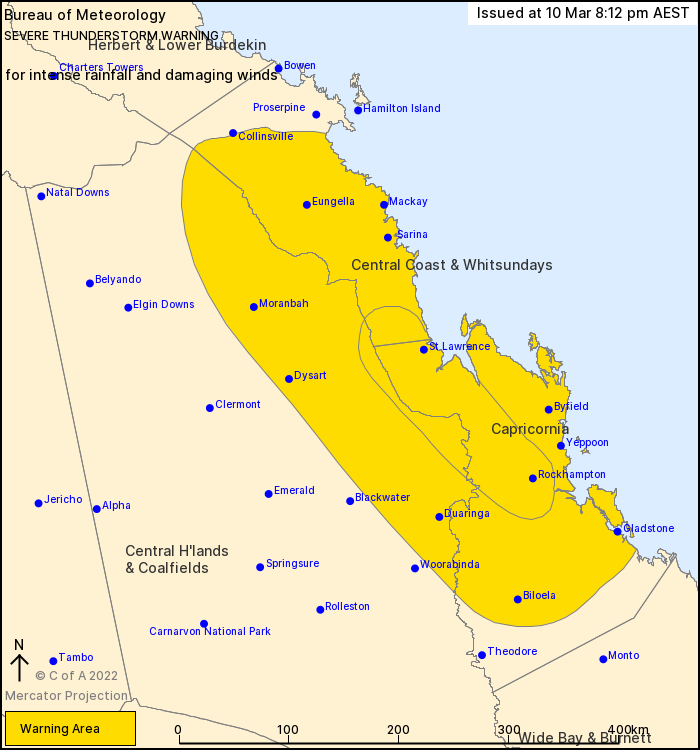