Severe storms with heavy rainfall now expected to develop about parts of the Sunshine Coast and the Brisbane area over the next few hours.

Severe thunderstorms are likely to produce damaging winds, heavy rainfall that may lead to flash flooding and large hailstones over the next several hours in the Central Coast and Whitsundays and parts of the Northern Goldfields and Upper Flinders, Herbert and Lower Burdekin and Central Highlands and Coalfields districts. Locations which may be affected include Proserpine, Charters Towers, Bowen, Townsville, Collinsville and Hamilton Island.

Severe thunderstorms are likely to produce heavy rainfall that may lead to flash flooding over the next several hours in the Southeast Coast and parts of the Wide Bay and Burnett and Darling Downs and Granite Belt districts. Locations which may be affected include Warwick, Toowoomba, Brisbane, Dalby, Maroochydore, Kingaroy, Stanthorpe and Ipswich.

Severe thunderstorms are no longer occurring in the Central West district and the warning for this district is CANCELLED.

82mm recorded in an hour at Mt Sylvia alert earlier this afternoon, southeast of Toowoomba.

57mm recorded in an hour at Spicers's Peak late this afternoon, east of Warwick. 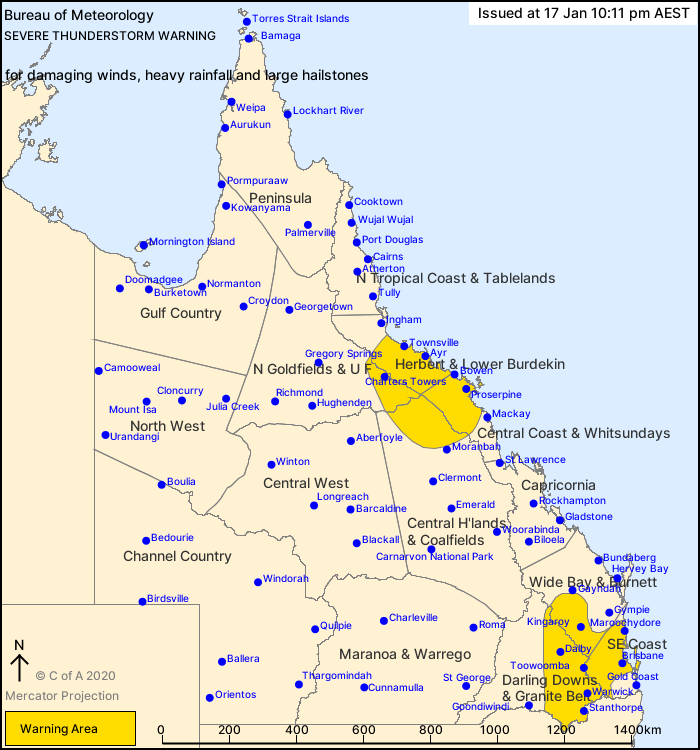