For people in parts of Peninsula and Gulf Country Forecast Districts.

Weather Situation: At 10am AEST Monday, Tropical Cyclone Esther, category 1, was located over the Gulf of Carpentaria about 50 km west of Mornington Island, moving south southwest at about 15km/hr.

Tropical Cyclone Esther is expected to continue on a general southwesterly track towards the southern Gulf of Carpentaria during today crossing the Gulf Coast around midday.

A fresh to strong north-westerly monsoonal wind flow will continue to extend over western Cape York Peninsula during today on the eastern periphery of the low.

Thunderstorms may produce damaging wind gusts of around 100km/h within the warning area over the western Cape York Peninsula. Isolated brief tornadoes with locally destructive wind gusts in excess of 125km/h are also possible with these thunderstorms.

The threat for widespread and prolonged heavy rainfall has eased, however brief bursts of heavy rain remain possible with thunderstorms.

Tides are expected to be abnormally high along western Cape York Peninsula, but they are no longer expected to exceed the highest tide of the year.

Note: A tropical cyclone warning should be viewed in addition to this warning and extends from Karumba westwards to beyond the Northern Territory border - see http://www.bom.gov.au/cyclone/index.shtml

Locations which may be affected include Kowanyama, Karumba, Delta Downs Station and Pormpuraaw.

Queensland Fire and Emergency Services advises that people should:
* Move your car under cover or away from trees.
* Secure loose outdoor items.
* Seek shelter, preferably indoors and never under trees.
* Beware of fallen trees and powerlines.
* For emergency assistance contact the SES on 132 500. 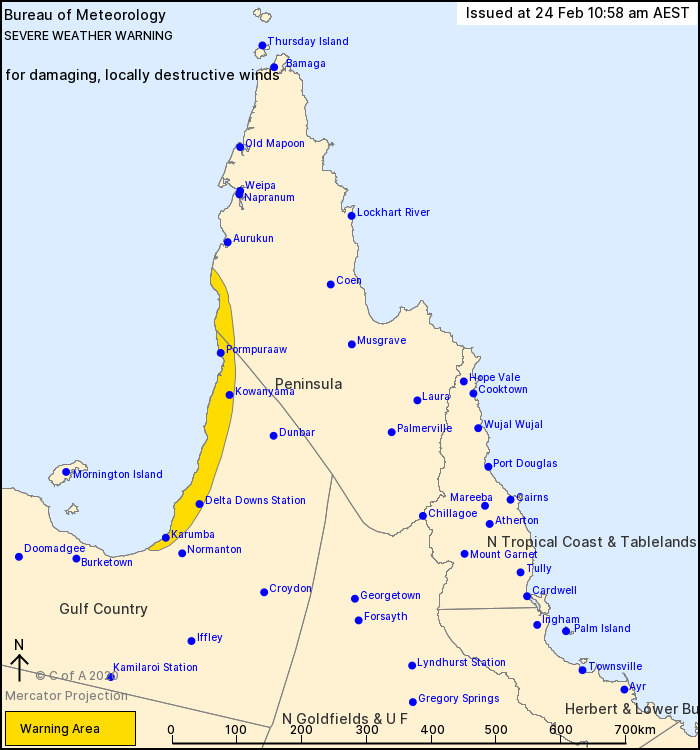