Weather Situation: At 10am AEST Sunday, a tropical low was located over the Gulf of Carpentaria about 275 km north north west of Mornington Island and moving south at about 7km/hr. The low is situated within a strengthening monsoon trough, which extends across the northern Gulf of Carpentaria and northern Coral Sea.

The tropical low is rated a high chance of forming into a tropical cyclone later today into tonight as it continues a south to southwesterly track towards the southern Gulf of Carpentaria.

A strong north-westerly monsoonal wind flow will extend over Torres Strait and western Cape York Peninsula during the next couple of days.

Heavy rainfall, that may lead to flash flooding is possible over the entire warning area. 6 hourly totals of 100 to 150mm are likely with thunderstorm activity.

Abnormally high tides are likely to impact western Cape York Peninsula from Weipa south to Kowanyama with water levels on the high tide potentially exceeding the highest tide of the year by up to 0.5m today and tomorrow.

Note: A tropical cyclone watch should be viewed in addition to this warning and extends from Kowanyama to the Northern Territory border - see http://www.bom.gov.au/cyclone/index.shtml

Locations which may be affected include Lockhart River, Weipa, Thursday Island, Coen, Aurukun and Napranum. 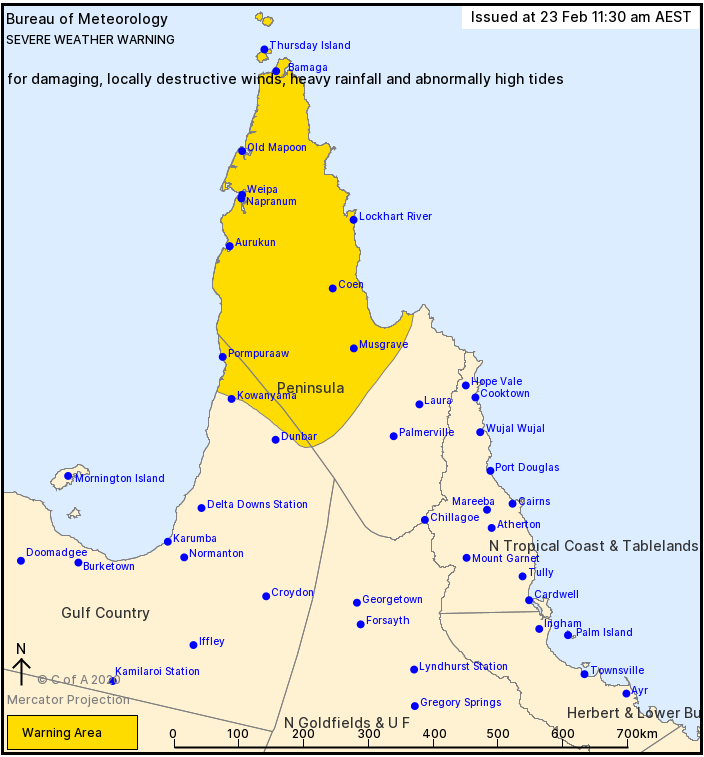