For people in parts of Wide Bay and Burnett and Southeast Coast Forecast Districts.

Heavy rainfall may develop between Seventeen Seventy and Caloundra on Sunday night.

Weather Situation: A trough with an embedded subtropical low over the central Coral Sea is forecast to deepen while moving rapidly southwest towards the Capricornia Coast on Sunday. It is then expected to adopt a south to southeasterly track on Monday and move parallel to the coast, either along the coastal fringe or just offshore.

The threat of heavy rainfall is highly dependent on the track of the trough and embedded subtropical low.

HEAVY RAINFALL which may lead to FLASH FLOODING may develop over areas between Seventeen Seventy, Gympie and Caloundra on Sunday night and into Monday. Six-hourly rainfall totals between 120 to 160 mm are likely in areas with locally intense falls up to 200 mm possible over coastal communities and Fraser Island.

A Flood Watch is current for coastal catchments between St Lawrence and the Queensland/New South Wales border, extending inland to the Darling Downs. 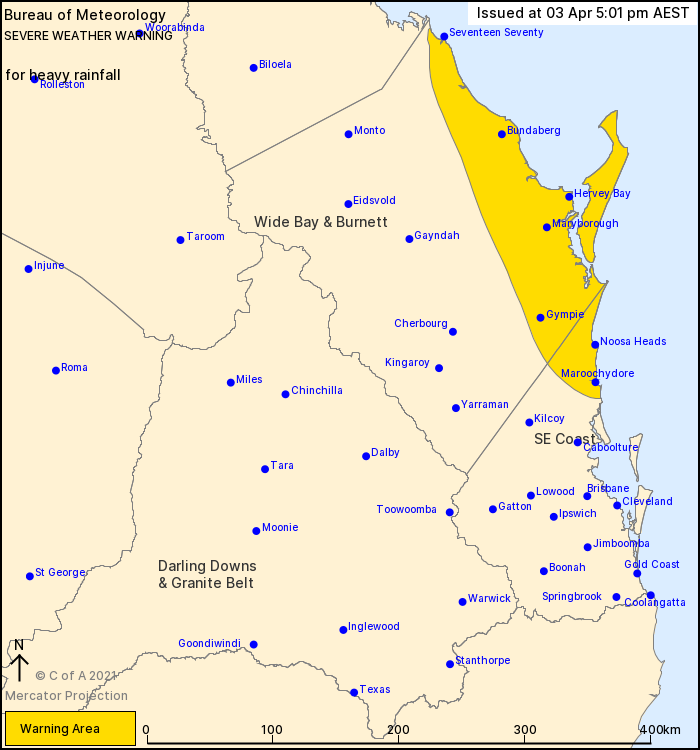