For people in parts of North Tropical Coast and Tablelands and Herbert and Lower Burdekin Forecast Districts.

HEAVY, LOCALLY INTENSE RAINFALL TO DEVELOP OVER THE NORTHEAST TROPICAL COAST AND RANGES FROM THURSDAY EVENING.

Weather Situation: A surface trough located over the northwestern Coral Sea is forecast to deepen while moving onto the northeast tropical coast during Thursday. The trough is expected to deepen further and become slow-moving on Friday before shifting north of Cairns early on Saturday.

HEAVY RAINFALL which may lead to FLASH FLOODING is forecast for the northeast tropical coast between the Daintree and Rollingstone from Thursday evening and likely to continue through Friday. Six-hourly rainfall totals between 150 to 200 mm are likely, reaching up to 250 mm over the coast and ranges.

Localised INTENSE RAINFALL leading to DANGEROUS AND LIFE-THREATENING FLASH FLOODING is also possible during this period with six-hourly totals in excess of 300 mm, particularly about the Cassowary Coast on Friday.

A Flood Watch is current for coastal catchments between Rollingstone and the Daintree. 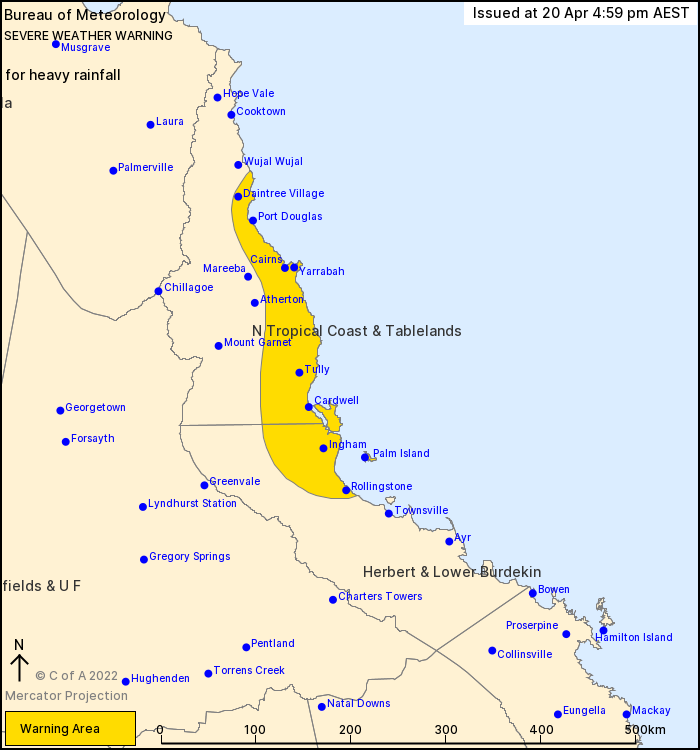