Weather Situation: An unseasonably moist, northeasterly flow across northern Queensland will combine with a strengthening upper trough over central Australia, producing an extensive cloud band. As a result, widespread heavy rainfall is expected to develop across central and northwestern parts of the state from Tuesday morning. Heavy rainfall is expected to shift east on Wednesday, increasing along the east coast.

HEAVY RAINFALL which may lead to FLASH FLOODING is forecast for the Central West and parts of the North West, Gulf Country, Northern Goldfields and Upper Flinders and Channel Country districts from Tuesday morning. Six-hourly rainfall totals between 60 - 100mm are likely.

Locally INTENSE RAINFALL with embedded thunderstorms which may lead to DANGEROUS AND LIFE-THREATENING FLASH FLOODING is also possible for the Central West and parts of the North West districts, with six-hourly rainfall totals up to 150mm possible.

See http://www.bom.gov.au/qld/warnings/ for the latest Flood Warnings and Flood Watches for Queensland. 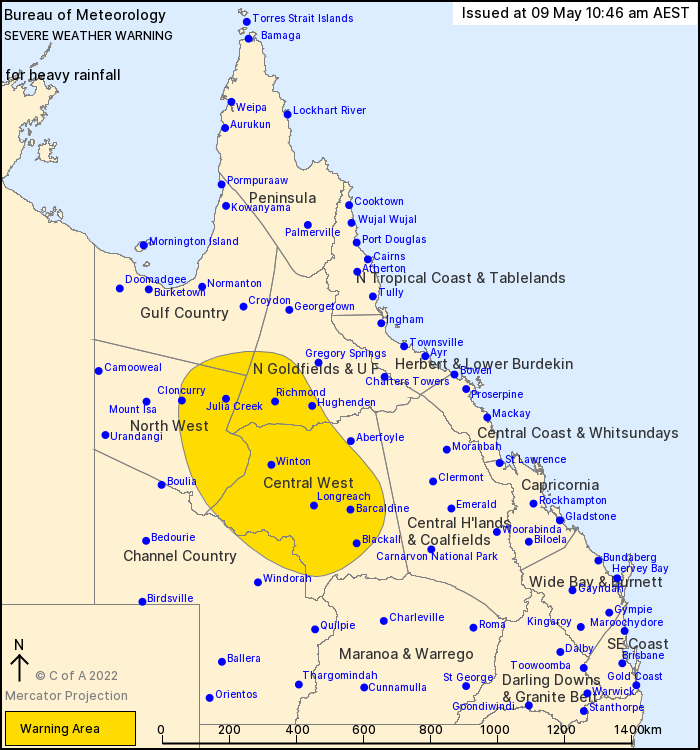