For people in Southeast Coast and parts of Wide Bay and Burnett Forecast Districts.

Weather Situation: A strong upper trough and associated cut-off low will move slowly eastward across the southeastern interior of Queensland from tonight into Thursday. A surface trough near the southeast coast will deepen in response to the upper system. The trough is forecast to remain slow-moving through Thursday, producing periods of heavy to intense rainfall over the next few days.

HEAVY, locally INTENSE RAINFALL, which may lead to flash flooding is occurring north of Maroochydore and is forecast to extend to areas east of about Double Island Point, Toowoomba, Boonah and the Gold Coast early Wednesday morning. Six-hourly rainfall totals between 100 to 200 mm are likely, with 250 to 350 mm possible.
Currently, the most intense rainfall is occurring the area east of Gympie, near Kin and Kin, and parts of the Sunshine Coast.

Areas of HEAVY to INTENSE RAINFALL may extend further inland over eastern parts of the Darling Downs and down towards the QLD/NSW border during Thursday.
A Flood Watch is current for parts of Southeast Queensland. For more details, please visit www.bom.gov.au/qld/warnings/.

Locations which may be affected include Toowoomba, Brisbane, Maroochydore, Gympie, Caboolture and Ipswich. 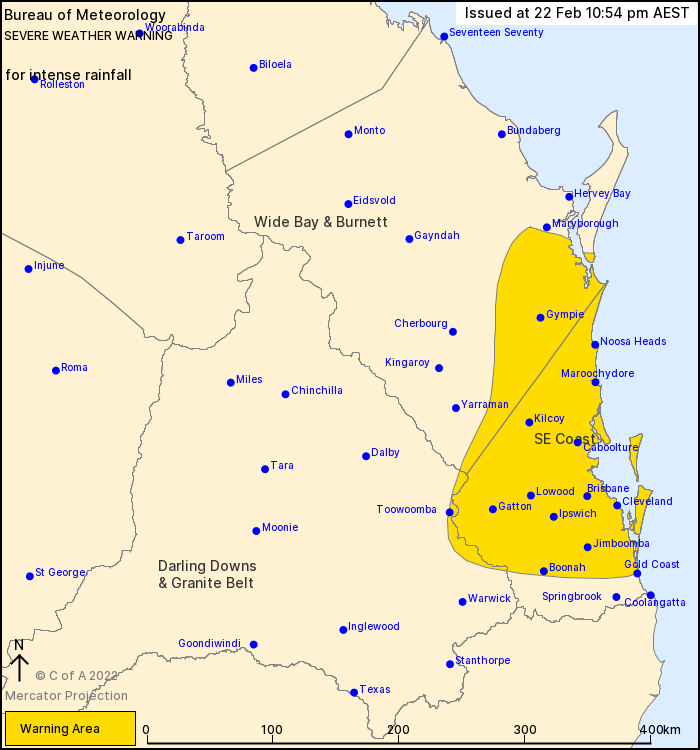