The tropical low is currently moving slowly south over the Gulf of Carpentaria east of Groote Eylandt. During today, the southerly movement should accelerate, and meanwhile the system is expected to intensify and develop into a tropical cyclone tonight. Conditions for further intensification are favourable, and the system could still briefly reach category 2 prior to making landfall about the southern Gulf of Carpentaria coast between about Borroloola and Mornington Island on Monday morning.

Hazards:
GALES with gusts to 110 kilometres per hour may develop about coastal and island communities between Port Roper and Kowanyama, including Groote Eylandt, Mornington Island, Borroloola, Burketown, and Karumba, later tonight or early Monday morning. These GALES may extend further inland over the Northern Territory later on Monday as the system moves inland.

DESTRUCTIVE winds with gusts to 130 kilometres per hour are possible in coastal areas between about Borroloola and Mornington Island, including Bing Bong, early on Monday as the system approaches.

Recommended Action:
In the Northern Territory, NTES advises:
- People from Port Roper to the NT/Qld Border, including Groote Eylandt, and surrounding areas should activate their household plan now.
- Start preparations for a cyclone, know where you will shelter.
- Listen for the next advice.
- For cyclone safety and preparation advice www.securent.nt.gov.au

In Queensland:
People between the NT/Qld border and Kowanyama, including Mornington and Sweers Islands, Burketown, and Karumba, and adjacent inland areas between Normanton and the NT/Qld border should immediately commence or continue preparations, especially securing boats and property using available daylight hours.
People in inland areas between the NT/Qld border and Burketown, should consider what action they will need to take if the cyclone threat increases.
- Information is available from your local government
- For cyclone preparedness and safety advice, visit Queensland's Disaster Management Services website (www.disaster.qld.gov.au)
- For emergency assistance call the Queensland State Emergency Service (SES) on
132 500 (for assistance with storm damage, rising flood water, fallen trees on buildings or roof damage). 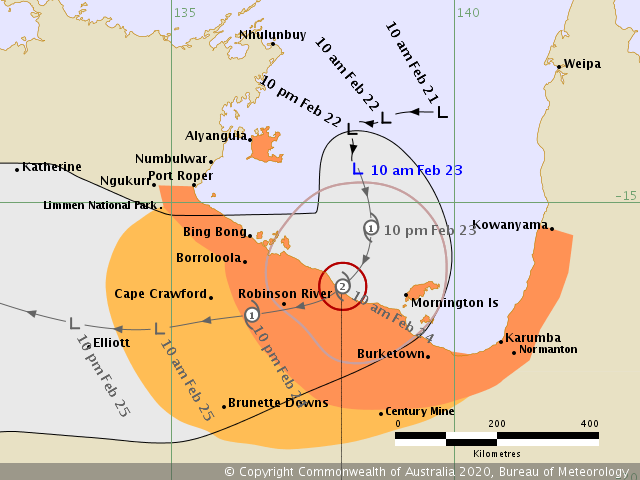