Issued at 1:15 am Tuesday, 31 December 2019.
Thunderstorms with damaging winds ahead of and near a strong change.

Severe thunderstorms are likely to produce damaging winds in the warning area over the next several hours. Locations which may be affected include Moomba, Innamincka, Dalhousie Springs, the Simpson Desert Conservation Park and Mungeranie on the Birdsville Track.
Severe thunderstorms are no longer occurring in the Flinders, Mid North, Riverland and North West Pastoral districts and the warning for these districts is CANCELLED.

Thunderstorms yesterday afternoon produced wind gusts to 93 km/h at Renmark and 95 km/h at Cultana, near Whyalla.

Winds averaged 69 km/h at Oodnadatta last night as the change moved through.
The State Emergency Service advises that people should:
* Secure or put away loose items around your property.
* Move cars under cover or away from trees.
* Keep clear of fallen power lines.
* Stay indoors, away from windows, while storms are nearby. 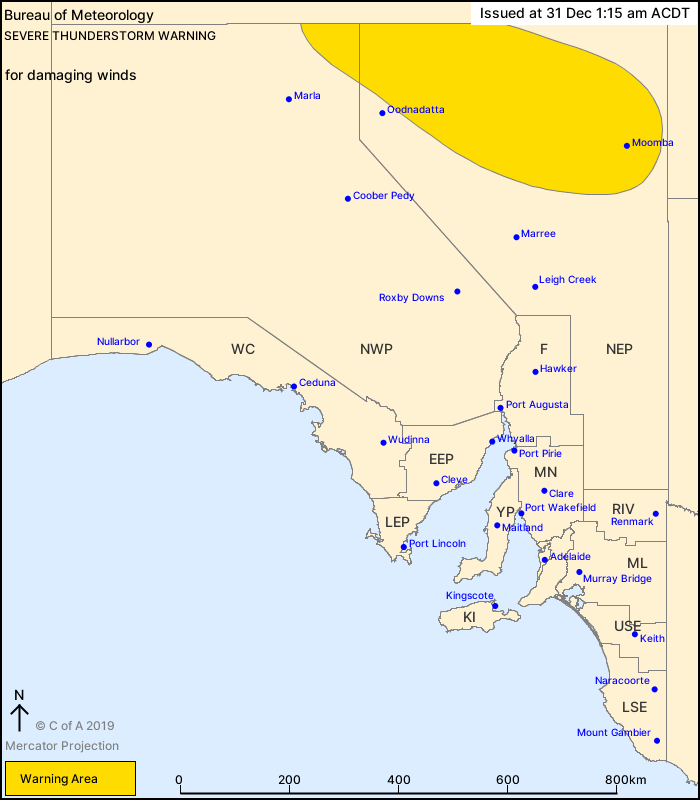