Heavy rainfall forecast to ease through central parts during Sunday, with renewed thunderstorm development this afternoon.

Weather Situation: An upper level low near the west coast of Eyre Peninsula is forecast to drift slowly east today. A surface trough is also expected to continue moving slowly eastward over central parts of the state with broad instability and deep tropical moisture to its east.

HEAVY RAINFALL which may lead to further FLASH FLOODING is possible over the warning area during Sunday morning and early afternoon. Thunderstorms with heavy to intense rainfall are also possible in the warning area.

2 hourly rainfall totals in excess of 30mm are possible, with isolated totals over 6 hours in excess of 50mm. Areas of rain are likely to ease late morning or early afternoon before thunderstorms re-develop over the warning area in the afternoon.

A separate Severe Thunderstorm Warning will be issued if significant thunderstorms develop. Refer to these warnings for more details.

A Flood Watch is also current for this event.

Severe weather is no longer occurring in the Lower Eyre Peninsula district and the warning for this district is CANCELLED.

9am Sunday to 4am Monday:

The State Emergency Service advises that people should:
* Don't drive, ride or walk through flood water;
* Keep clear of creeks and storm drains;
* Stay indoors, away from windows, while conditions are severe. 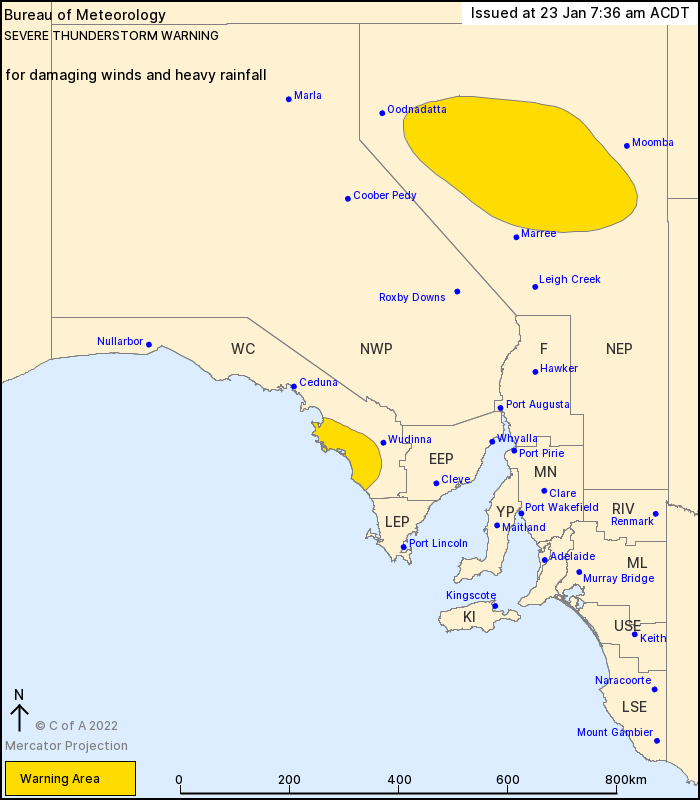