Severe thunderstorms, some of which have INTENSE rainfall, are continuing over north and central areas of the State.

Weather Situation: A very humid and unstable northerly airmass, ahead of a trough of low pressure over the Eyre Peninsula and the North West Pastoral district is leading to the development of severe thunderstorms.

Severe thunderstorms are likely to produce heavy to INTENSE rainfall that may lead to dangerous and life-threatening flash flooding and damaging winds over the next several hours in parts of the Yorke Peninsula district. Locations which may be affected include Maitland, Kadina and Ardrossan.

Severe thunderstorms are likely to produce heavy rainfall that may lead to flash flooding and damaging wind gust in excess of 90km/h over the next several hours in the Lower Eyre Peninsula, Eastern Eyre Peninsula, Yorke Peninsula, Kangaroo Island and parts of the West Coast, North West Pastoral and North East Pastoral districts. Locations which may be affected include Port Lincoln, Whyalla, Maitland, Kingscote, Moomba and Cleve.

Parts of Yorke Peninsula have reported around 20-30mm per hour this morning. 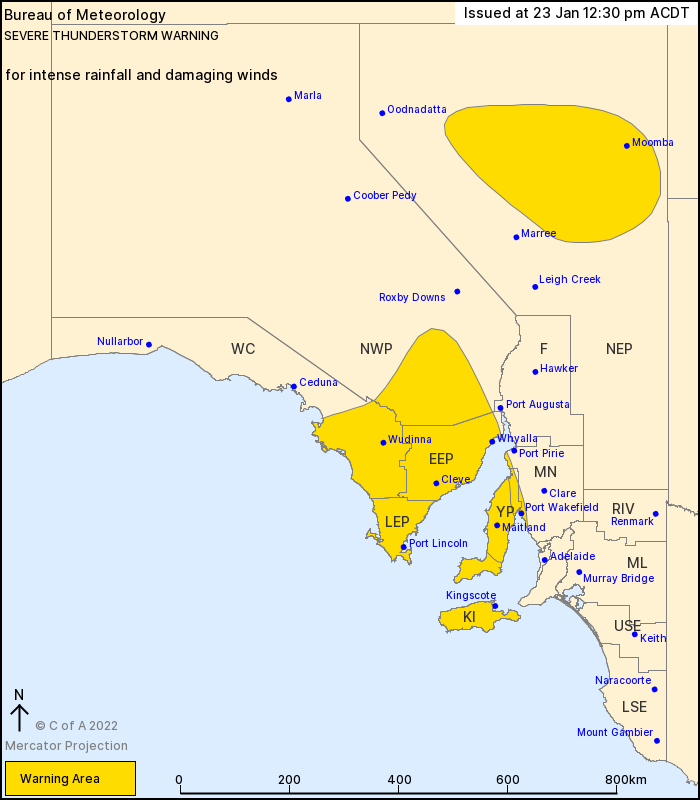