For people in parts of North West Pastoral district.

Issued at 5:03 am Monday, 17 January 2022.
MOISTURE FROM EX-TROPICAL CYCLONE TIFFANY WILL BRING HEAVY RAIN AND DAMAGING WIND GUSTS ON MONDAY

Weather Situation: Ex-Tropical cyclone Tiffany remains a deep tropical low southeast of Giles, which will feed moisture into northwestern South Australia. The tropical low will move into the far northwest corner of the State early Monday then slowly track east while weakening during the day.

HEAVY RAINFALL which may lead to FLASH FLOODING is developing over the far northwest of the state, and is expected to extend south and east during the day. The heavy rain will begin to ease from the west during the afternoon and throughout the warning area by late Monday evening.

Rainfall totals of 50 to 100mm are likely, with locally heavier falls possible, particularly with thunderstorms.

Current satellite imagery indicates the heaviest rainfall is occurring to the northwest near Western Australian and North Territory border, and over the north of the warning area.

A flood watch is also current for the North West Pastoral district associated with this event.
WINDS averaging 60 to 70 km/h are expected within the warning areas with DAMAGING WIND GUSTS up to 100 km/h possible, particularly in the north. These winds are also expected to ease during Monday evening.

Locations which may be affected include Ernabella, Amata, Pipalyatjara, the area around Emu Junction and parts of the Great Victoria Desert.

Winds averaging 70 km/h and gusts to 98 km/h observed at Giles at midnight.

The State Emergency Service advises that people should:
* Move vehicles under cover or away from trees;
* Secure or put away loose items around your property.
* Don't drive, ride or walk through flood water;
* Keep clear of creeks and storm drains;
* Stay indoors, away from windows, while conditions are severe. 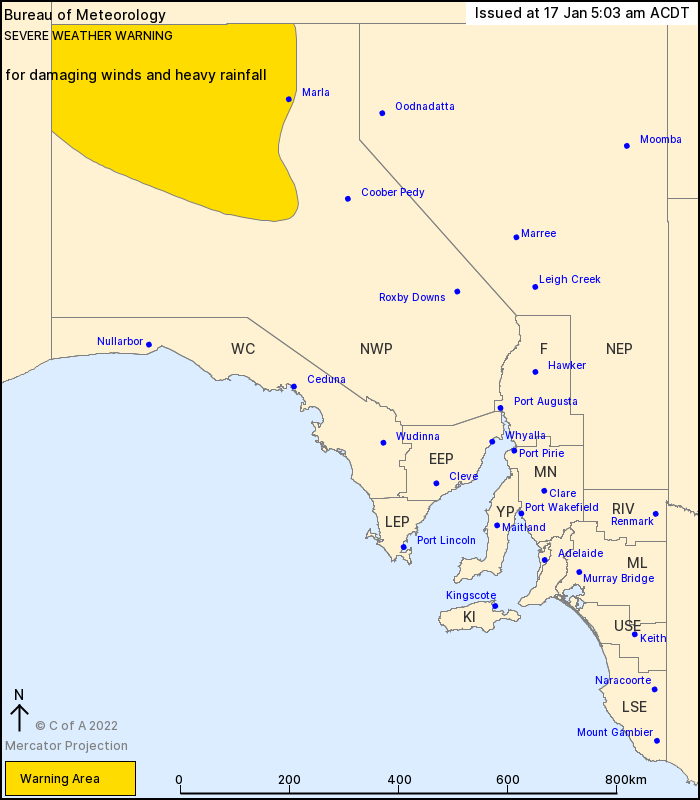