Areas of isolated minor flooding are possible in the Cann and Genoa River catchments during Tuesday into Wednesday. Rapid river rises may occur in fire affected areas.

Showers and storms are forecast across the flood watch area today.

In the 24 hours to 9 am Tuesday, rainfall totals of around 10 to 20 mm were observed across the flood watch area.

Rainfall totals of 10 to 20 mm are forecast for the rest of Tuesday in the Cann and Genoa River catchments, with isolated heavier falls of 40 to 50 mm with storms.

With the forecast rainfall, river rises are possible across the Cann and Genoa River catchments and areas of isolated minor flooding may develop during Tuesday into Wednesday.

A minor flood warning is current for the Snowy River catchment.

The Cann and Genoa catchments have been significantly affected by recent fires, which may result in faster and stronger river responses to rainfall. Heavy rainfall will increase the potential for localised flooding, landslides and debris across roads in fire affected areas. Rainfall runoff into waterways may contain debris such as ash, soil, trees and rocks.

Catchments likely to be affected include:
Bemm, Cann and Genoa Rivers
(widespread fire affected areas in the catchments) 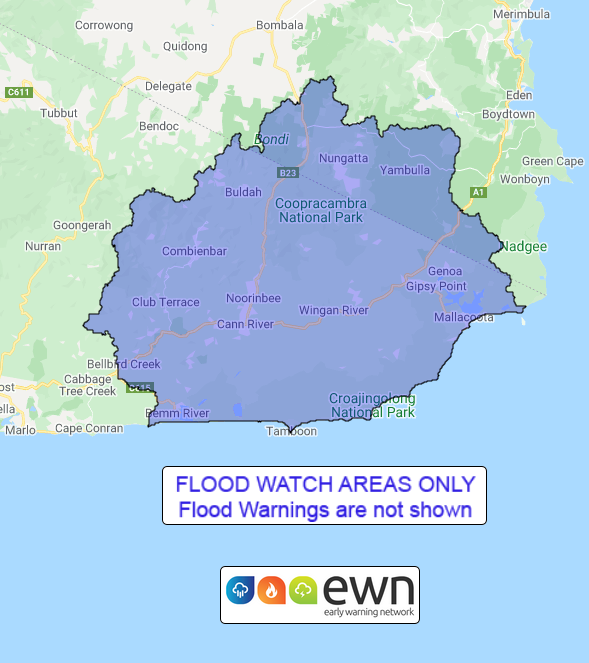