Rainfall is expected to increase in the Kimberley near the Northern Territory border on Sunday, extending westward during Monday through to Wednesday next week. The forecast increase in rainfall is associated with a tropical low forecast to develop over waters adjacent to the East Kimberley.

Forecast rainfall in the East Kimberley Rivers including Kununurra and Wyndham and down to Argyle Mine for the 48hrs to 9am Monday are expected to be 40 - 60 mm with isolated falls to 100 mm.

As rainfall moves further west towards Oombulgurri and Faraway Bay during Monday and Tuesday falls for the 48 hours to 9am Tuesday are expected to be 70 - 150 mm with isolated heavier falls.

As the low progresses further west overnight Tuesday rainfall totals for the 48 hours to 9am Wednesday for localities from Kuri Bay, Mitchel Plateau and Kalumburu are likely to be 150 - 200 mm with isolated falls up to 300 mm.

The heaviest rainfall is expected to be confined to coastal parts across the Kimberley remaining within 200km of the coast.

Rainfall in the affected catchments is expected to result in river rises, areas of flooding and adversely impact road conditions. Some roads may become impassable and communities linked by minor roads may become isolated.

Catchments likely to be affected include:
East Kimberley Rivers 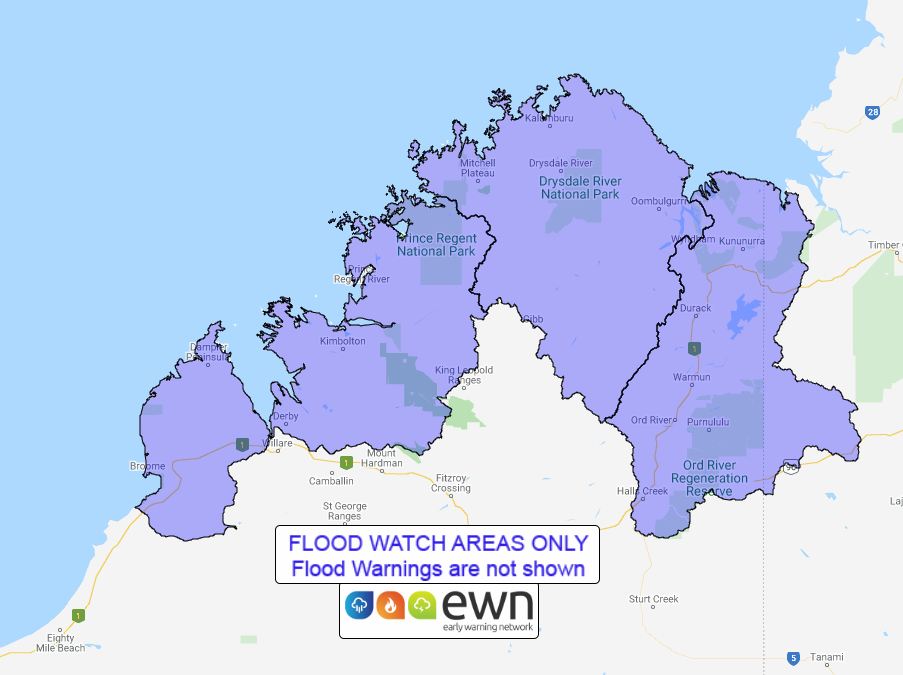