Issued at 1:03 pm Wednesday, 6 May 2020.
Severe Weather continues over southwestern WA and will begin to ease during Wednesday afternoon.

A deep low pressure system lies to the south of the state and is currently moving east into the Bight during Wednesday.
WIDESPREAD DAMAGING WINDS, averaging 60 to 70 km/h with peak gusts to around 100 km/h are likely and could cause DAMAGE TO HOMES AND PROPERTY.

HIGHER THAN NORMAL TIDES may cause FLOODING OF LOW-LYING COASTAL AREAS within the warning area during Wednesday.

DAMAGING SURF CONDITIONS, which could cause SIGNIFICANT BEACH EROSION to coastal locations is still expected between Geraldton and Israelite Bay.

Severe weather is no longer occurring in the Central Wheat Belt district and the warning for this district is CANCELLED.

This weather system has produced the kind of weather that is only seen in southwest WA about 2 times per year. 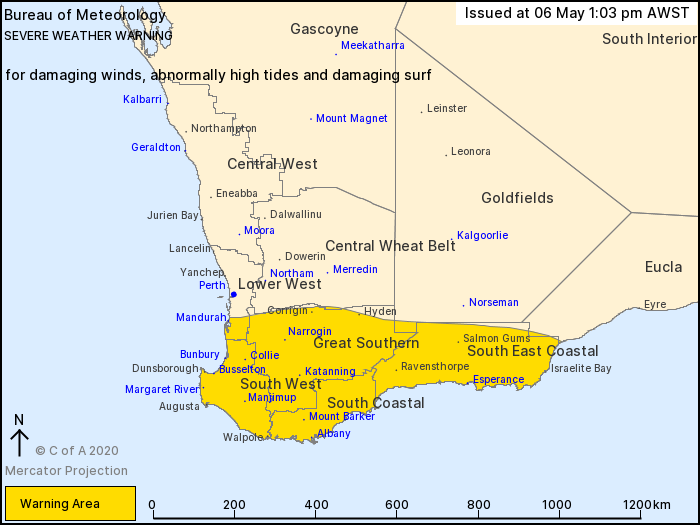