Damaging winds possible through large parts of the State as a rain band and strong cold front move over during Sunday. Heavy rain is also possible through the Central West and adjacent Gascoyne districts.

Weather Situation: A rain band and cold front is moving over western parts of the State this morning, reaching central parts this afternoon and into southeastern parts on Sunday evening. Ahead of the rain band, very windy conditions are expected with possible damaging wind gusts. Moderate to heavy rainfall is expected with the rain band as it moves through western parts of the warning area on Sunday morning. On Sunday afternoon and evening behind the rain band, a cold and unstable air mass will likely bring thunderstorms to the west coast which have the potential to produce damaging wind gusts.

In western parts of the warning area, DAMAGING WINDS with gusts to 110 kilometres per hour are possible and could cause DAMAGE TO HOMES AND PROPERTY. Winds are expected to ease for a period as the rain band moves over, however DAMAGING WINDS will continue to be a threat as gusty showers and thunderstorms develop about coastal parts during the afternoon.

Through the Gascoyne, Central Wheat Belt, Goldfields and South East Coastal districts, sustained winds of up to 60 kilometres per hour are expected to develop this morning with gusts to 100 kilometres per hour possible. In these areas there is a risk of raised dust ahead of the rain band.

HEAVY RAINFALL which may lead to FLASH FLOODING may develop through the Central West and southern coastal parts of the Gascoyne as the rain band moves over this morning.

Locations which may be affected include Denham, Geraldton, Kalbarri, Moora, Mullewa and Northampton.

Cape Naturaliste recorded a wind gust of 106 kilometres per hour at 6:21am.

Rottnest Island recorded a wind gust of 98 kilometres per hour at 7:44am.

Abrolhos Island recorded a wind gust of 98 kilometres per hour at 2:21am.

Pearce RAAF recorded a wind gust of 98 kilometres per hour at 7:48am. 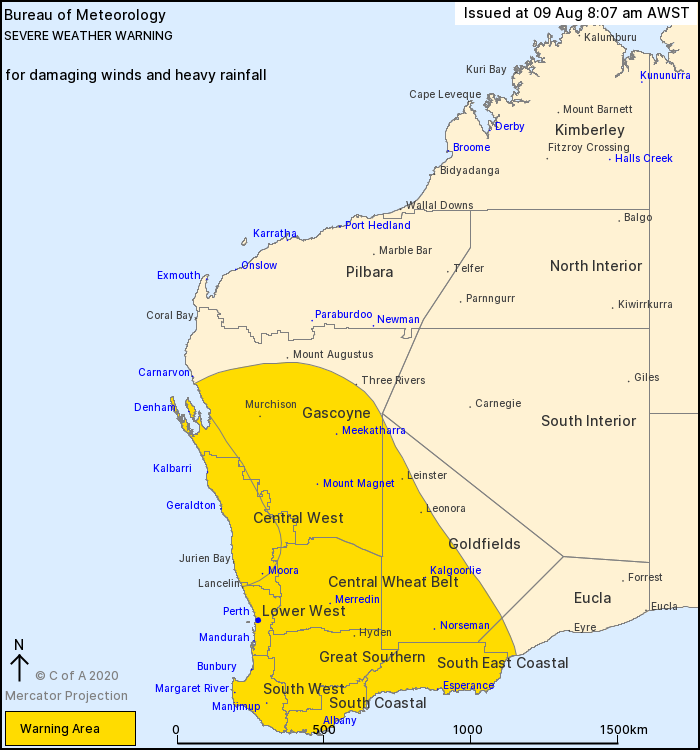