Gales expected to develop on the east Pilbara and west Kimberley coasts from Friday afternoon in coastal areas including Broome but not Port Hedland.

Watch Zone
Inland areas of the east Pilbara including Telfer.

Cancelled Zone
The Watch zone from Whim Creek to Port Hedland is cancelled.

Movement: southwest at 17 kilometres per hour.

Tropical low (08U) is gradually intensifying as it moves towards the coast. It is expected to intensify into a tropical cyclone overnight and may reach Category 2 intensity late on Friday as it approaches the coast in the vicinity of Eighty Mile Beach.
Hazards:

GALES may develop on the coast near Bidyadanga and Broome during Friday afternoon and may extend to other parts of the Warning area during Friday evening. Gales are not likely at Port Hedland.

DESTRUCTIVE WINDS with gusts to 140 kilometres per hour may develop overnight Friday or early Saturday as the system nears the coast. It is unlikely that destructive winds will be experienced in Broome.

BLUE ALERT: People in communities between Beagle Bay and Port Hedland including Broome, but not including Port Hedland, need to prepare for cyclonic weather and organise an emergency kit including first aid kit, torch, portable radio, spare batteries, food and water. 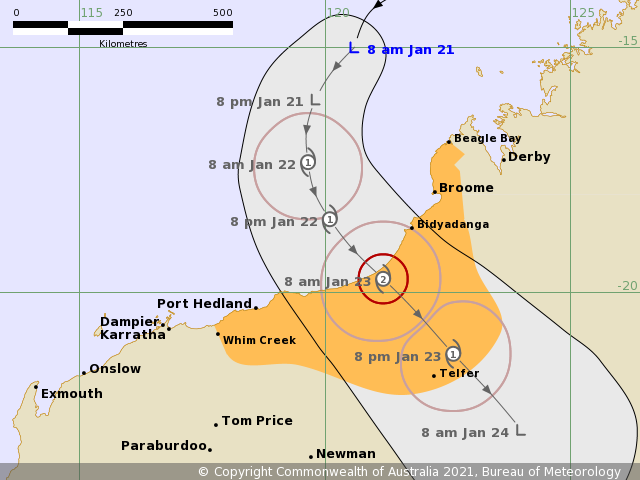