Watch Zone
Wallal to De Grey, extending inland to Marble Bar and areas north of (but not including) Telfer

Location: within 35 kilometres of 17.0 degrees South 122.1 degrees East, estimated to be 105 kilometres north of Broome and 165 kilometres west northwest of Derby.

Movement: west at 11 kilometres per hour.

Ex-Tropical Cyclone Anika is moving offshore near the north coast of the Dampier Peninsula. It is likely to redevelop into a tropical cyclone during Wednesday morning offshore west of Broome.

The system may intensify further as it turns to the south over open ocean on Wednesday, potentially becoming a category 2 system. It is likely to then cross the west Kimberley or far east Pilbara coast early on Thursday. In the long term, the system is likely to weaken inland over northern WA by later Thursday or early Friday.

Hazards:
GALES with gusts to 100 kilometres per hour could develop between Beagle Bay and Wallal Downs late tonight or Wednesday morning, even before the system redevelops into a tropical cyclone. Gales are expected to extend along the coast to De Grey later on Wednesday, and inland to Marble Bar and north of, but not including, Telfer on Thursday.

DESTRUCTIVE winds with gusts to 130 kilometres per hour could develop near Bidyadanga Wednesday late afternoon or evening, if the system takes a track further to the east.

The DESTRUCTIVE CORE of Anika, with wind gusts to 130 kilometres per hour, is expected to approach and cross the coast between Wallal and Bidyadanga early on Thursday.

HEAVY RAINFALL is forecast about the Kimberley coast extending to west Kimberley later today and eastern Pilbara on Wednesday.

ABNORMALLY HIGH TIDES could cause DANGEROUS FLOODING between Bidyadanga and De Grey late on Wednesday night or late Thursday morning as the cyclone reaches the coast.

BLUE ALERT - For people in or around Beagle Bay to De Grey, including Broome, Beagle Bay and Bidyadanga, you need to prepare for cyclonic weather and organise an emergency kit including first aid kit, torch, portable radio, spare batteries, food and water.

ALL CLEAR - Derby to Beagle Bay, not including Beagle Bay.

Remaining people in the West Kimberley and East Pilbara Regions are advised to stay up to date with weather warnings and forecasts. 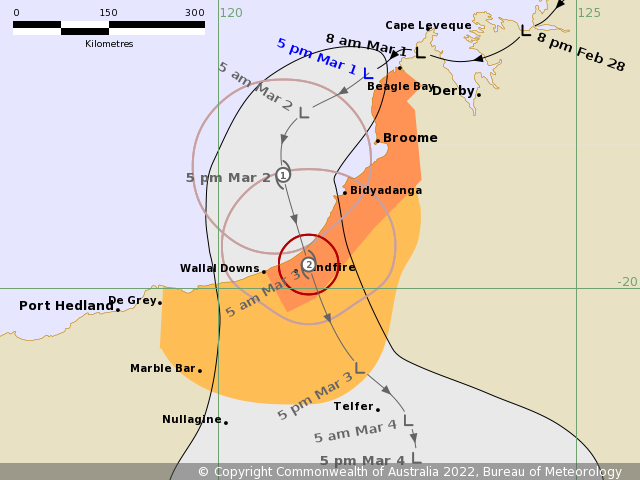