A tropical low (23U) in the Timor Sea is expected to develop into a tropical cyclone tonight and move closer to the coast over the weekend.
Areas Affected:

Warning Zone
Mitchell Plateau to WA/NT Border, including Wyndham and Kalumburu, not including Kununurra.

Location: within 55 kilometres of 12.4 degrees South 127.8 degrees East, estimated to be 330 kilometres west of Darwin and 245 kilometres north northeast of Kalumburu.

Tropical low 23U is currently located over the Timor Sea and is expected to develop into a tropical cyclone tonight or during Saturday morning. The system is likely to be slow-moving over the next two days.

There is some uncertainty about the movement of 23U in the longer term. There remains the possibly of a track moving to the east over the Top End though the track to the west southwest towards Western Australia is becoming more likely.
Hazards:

GALES with gusts to 100 kilometres per hour are expected to develop between the WA/NT border to Mitchell Plateau from tonight.

Prepare now for a cyclone, monitor conditions and stay informed.

Information on preparing for cyclones can be found at https://securent.nt.gov.au/

BLUE ALERT for people in or near Kalumburu and Wyndham, but not including Kununurra, need to prepare for cyclonic weather and organise an emergency kit including first aid kit, torch, portable radio, spare batteries, food and water.

Remaining people in the North Kimberley are advised to stay up to date with weather warnings and forecasts. 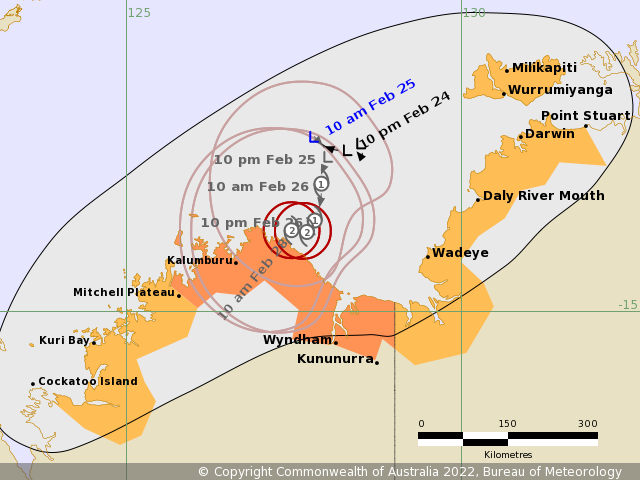