None.
Details of Severe Tropical Cyclone Damien at 6:00 pm AWST:

Location: within 20 kilometres of 21.0 degrees South 116.8 degrees East, estimated to be 30 kilometres south of Karratha and 90 kilometres northeast of Pannawonica.

Severe Tropical Cyclone Damien will weaken during the evening as it moves inland.
Hazards:

VERY DESTRUCTIVE winds with gusts up to 205 kilometres per hour are occurring near the cyclone centre, including near Karratha. These winds will start easing within the next few hours as the cyclone moves inland.

DESTRUCTIVE winds with wind gusts to 150 kilometres per hour are occurring between Roebourne and Cape Preston.

GALES will extend further inland through the central Pilbara and into the northeast Gascoyne tonight and on Sunday as the cyclone tracks further inland.

Residents between Dampier and Whim Creek, including Dampier and Karratha, are warned of the potential of a VERY DANGEROUS STORM TIDE as the cyclone centre crosses the coast. Tides are likely to rise significantly above the normal high tide mark with DAMAGING WAVES and VERY DANGEROUS FLOODING.

Heavy rain is likely to cause flooding in the Pilbara and Gascoyne as the cyclone moves inland over the weekend. Flood Watches and Warnings are current, please refer to http://www.bom.gov.au/wa/warnings/ for further details.
Recommended Action:

RED ALERT effective as of 5:30pm 8 Feb 2020: People in or near Whim Creek to Mardie (including Mardie) and south to Pannawonica (including Pannawonica, Whim Creek, Point Samson, Cossack, Wickham, Roebourne, Karratha and Dampier) need to go to shelter immediately.

YELLOW ALERT effective as of 5:30pm 8 Feb 2020: People in or near Whim Creek, east to Yule River and south to Wittenoom (and also including Barrow Island), need to prepare for cyclonic weather and move to shelter.

BLUE ALERT effective as of 5:30pm 8 Feb 2020: People in or near west of Mardie (not including Mardie) to Onslow but not including Onslow (including Tom Price, Paraburdoo, De Grey) need to prepare for cyclonic weather and organise an emergency kit including first aid kit, torch, portable radio, spare batteries, food and water.

ALL CLEAR WITH CAUTION: Wallal Downs to De Grey including Nullagine and Marble Bar and town of Port Hedland.

Communities in the Cyclone Warning and Watch zones should continue to monitor advice issued as changes to alerts and warnings may occur. 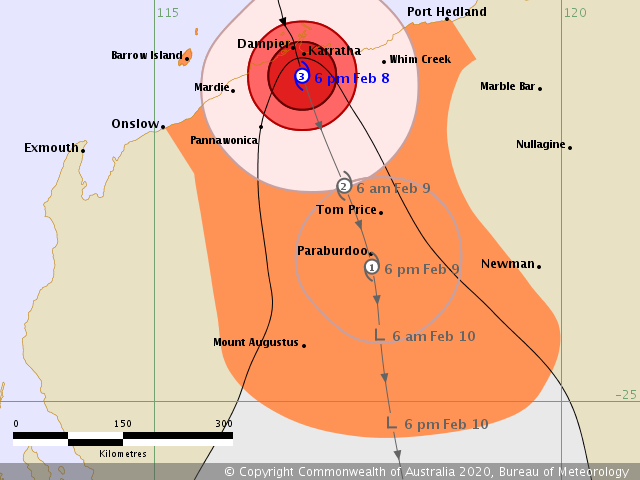