Headline:
A tropical cyclone expected to develop off the northwest Kimberley coast on Thursday. The Pilbara coast can expect gales from later Friday and a severe cyclone impact is possible on Saturday.

Movement: west at 14 kilometres per hour.

The low is forecst to move to the west off the northwest Kimberley coast tonight and develop into a tropical cyclone on Thursday. During Friday, the cyclone is forecast to turn towards the Pilbara coast and intensify before reaching the coast on Saturday.

Hazards:
Gales are forecast to develop along the Pilbara coast between Wallal Downs and Dampier including Port Hedland during Friday, possibly extending west to Onslow overnight Friday. DESTRUCTIVE winds with wind gusts to 150 kilometres per hour may develop overnight Friday night as the cyclone approaches the coast increasing further on Saturday near the cyclone centre.

ABNORMALLY HIGH TIDES could cause SERIOUS FLOODING at the coast between Dampier and Wallal on Saturday.

Heavy rain is likely to cause flooding in the Pilbara as the cyclone moves inland over the weekend. Refer to Flood Watch at: http://www.bom.gov.au/wa/warnings/

Recommended Action:
DFES advises that there are no community alerts at present. Communities between Wallal Downs and Onslow should listen for the next advice. 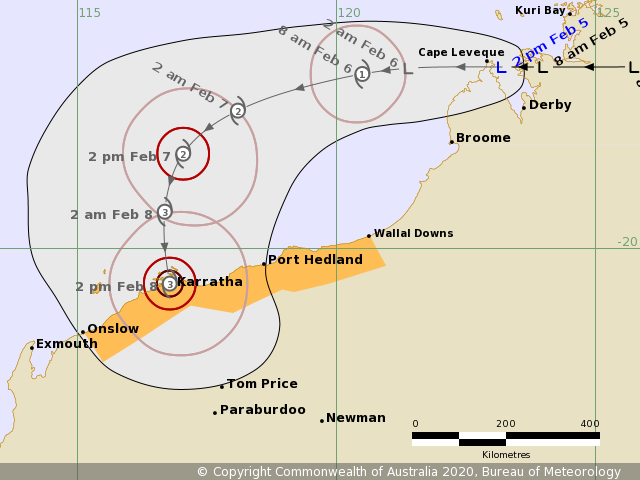