Southeast QLD and northeastern NSW experienced another day and night of significant weather with heavy rainfall during the morning exacerbating current flash flooding and levels in rivers creeks and estuaries. The vast majority of the heavy to very heavy rain was concentrated on the southern coastal and adjacent inland districts, with strong convergence bringing areas of enhanced rainfall onto the coast.

Some southeastern QLD sites recorded another day of rainfall over 100mm, from 9:00am Thursday, 13th February, 2020 to 9:00am this morning. Some of the sites that received over 100mm include Wolffdene receiving 142mm, 126mm at Wongawallan, 123mm at Benobble, 122mm at Oxenford Weir, 121mm at Luscombe, 120mm at Bahrs Scrub, 119mm at Carbrook and 100mm at Tomewin and Darlington respectively.

Weekly rainfall totals for southeastern QLD have reached greater than 500mm in some areas, resulting in widespread moderate flooding. Over the past week (to 9:00am, Friday, February 14th 2020), some of these rainfall totals include: 502mm at Coolangatta, 490mm at Ormiston, 425mm at Miami on the Gold Coast, 424mm at Cape Moreton, 422mm at the Southport Seaway, 388m at Mount Tamborine, 331mm at Manly, 316mm for Springbrook and 300mm for Canungra.


The Albert River at Tamborine peaked at 13.19m at 10:35pm and 10:58pm last night at moderate flood level and just shy of the 14.10m Major flood level (the Bridge is 15.4m). This river is now starting to show a decreasing trend since midnight.

The Albert River at Bromfleet (southwest of Tamborine) peaked at 14.10m at 4:51pm and 5:00pm yesterday evening at moderate flood, and not reaching the major flood level of 16m (the Bridge is 16.8m). This river is now also starting to show a decreasing trend in river level.

The Logan River Round Mountain alert near Laravale peaked at 12.31m at 1:40am this morning at moderate flood, falling shy of the 13m major flooding level (the Bridge at 13m in height also). The river has shown a significant increase in water level and fell below the 10m mark at 12:34pm today.

Another site of interest for the Logan River is the Macleans Bridge alert to the north of Jimboomba. The site is showing a slowly rising trend in minor flood and could potentially fall shy of the moderate flood level of 13.5m. The river is currently sitting at 12.89m as at 1:00pm today. The river is not expected to reach the bridge which sits at 17m in height.

An additional noteworthy site situated out of southeastern QLD is the Condamine River at the Chinchilla Weir. The river currently sits at major flood level and has peaked at 10.7m at 11:30am this morning. The major flood level for this site is 10m to the road. This river is expected to continue a very gradual decreasing trend should further rainfall avoid the catchment area.

Some parts of the Northern Rivers in New South Wales have also received rainfall totals over 100mm since 9:00am yesterday, with some including and not restricted to 180mm recorded at Hopkins Creek (Upper Rous River), 137mm at the Boat Harbour at the Upper Rous River, 128mm at Kunghur, 112mm at Green Pigeon, 101mm at Brays Creek at Misty Mountain. Areas in the Bellinger/Nambucca region that received in excess of 100mm also include: 149mm at Dorrigo, 126mm at Meldrum, 117mm at Lowanna and 101mm at the Dorrigo Mountain Top.

Weekly rainfall totals for eastern NSW have reached greater than 600mm in some areas, resulting in widespread moderate and major flooding. Over the past week (to 9:00am, Friday, February 14th 2020) some of these rainfall totals include: 611mm for Tweed Heads, 598mm at Katoomba, 520mm at Springwood, Murwillumbah on 451mm, 423mm at Mt. Seaview and Castle Cove, 392mm at Mullumbimby 383mm at Byron Bay, 381mm at Sydney Olympic Park, 368mm at Concord, 340mm at Canterbury and 301mm for Sydney Airport.

Rainfall is expected to ease over this afternoon and into tomorrow, although there still is cause for concern with the above listed rivers in both southeast QLD and northeastern NSW in moderate flood. As always remember to stay alert and vigilant to all warnings issued via the Early Warning Network during times of severe weather. Your safety is our #1 priority. 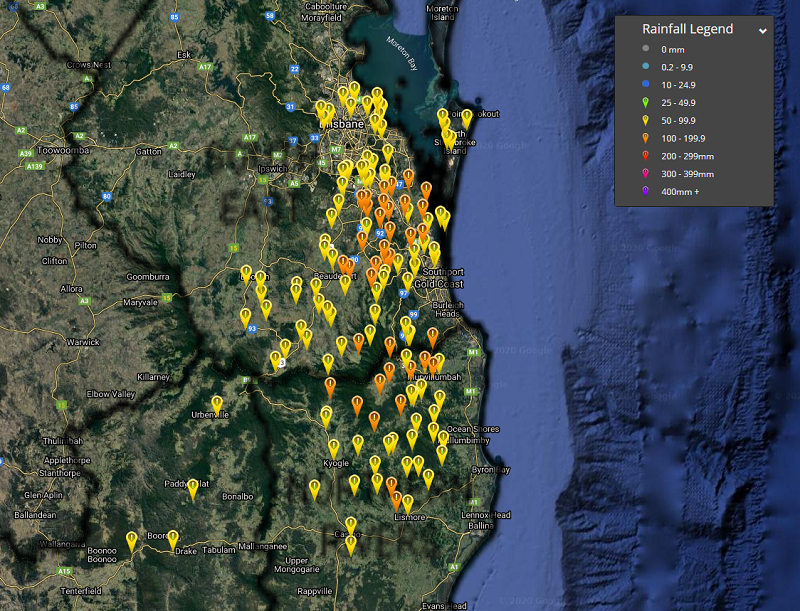