Bushfires to give way to rain and storms for South Australia

Hot temperatures and bushfire conditions across South Eastern South Australia will give way to showers, storms and rain periods on Monday afternoon and evening.

Adelaide reached a scorching 42.7°C yesterday afternoon as intense heat from North Western Australia was dragged south ahead of a low pressure trough and the remnants of a tropical low that impacted the Pilbara region of WA last weekend.

Hot temperatures and gusty northeast to northwesterly winds combined to produce severe to extreme fire danger for parts of the Mid North, Mount Lofty Ranges, Yorke Peninsula and Lower South East on Sunday. These conditions led to the development of a significant fire just to the southeast of Adelaide which quickly became emergency warned.

During Monday, cloud cover is continuing to thicken across the state as moisture increases leading to scattered showers, thunderstorms and rain periods for Central and Southeastern parts of SA this afternoon and evening. Widespread falls of 15-30mm are expected, with isolated heavier falls exceeding 60mm possible, particularly with any storm activity.

This may lead to flash flooding with the Bureau of Meteorology issuing a flood watch for the Flinders Ranges Rivers and Creeks, Broughton River, North West Lake Torrens and Eastern Eyre Peninsula.

Conditions are expected to rapidly clear during Tuesday, with mostly fine and cooler conditions returning to the region with temperatures expected to increase slightly towards the weekend. 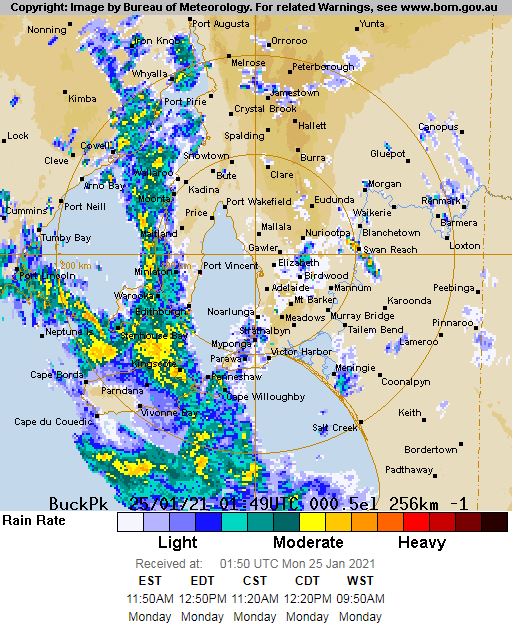